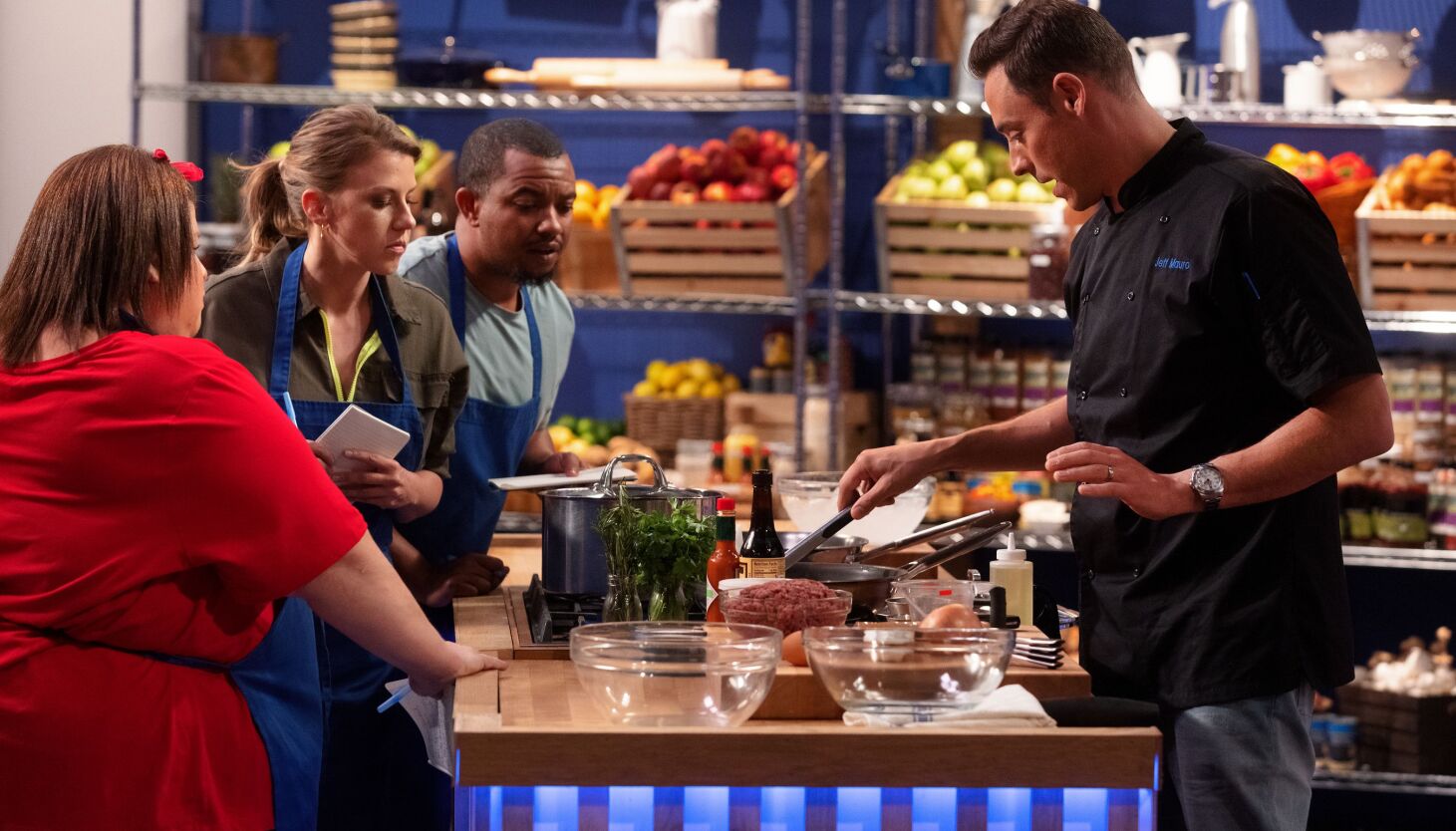 The new season of Food Network’s “Worst Cooks in America Celebrity Edition” has a “Full House” of ‘90s stars.

With a new “That’s So 90’s” theme, the series (which premiered Sunday and is streaming on Discovery+) assembled a group that will make viewers of a certain age say, “Oh, I loved them!”

Jodie Sweetin, who played Danny Tanner’s middle daughter Stephanie on ABC’s “Full House” and its Netflix revival “Fuller House,” and Tracey Gold, the brainy Carol Seaver on ABC’s “Growing Pains,” are among celebrity cast members who attempt to improve their cooking skills with the help of a chef mentor and compete for a top spot among the lacking cooks.

Sweetin and Gold’s stars burned brightly in the ‘90s, just like the flashes of fire in their home kitchens.

Sweetin, 40, saw flames coming out of her oven about a month ago. The culprit: pizza boxes left the night before, after her fiancé, therapist Mescal Wasilewski, turned it on the next day.

“That was pretty epic, because we almost burned the house down with that,” she says. She spotted smoke billowing out of the oven. “And we open it up and just flames shoot out of pizza boxes.” That aside, she says her downfall when it comes to cooking is really her tendency to order in rather than follow a recipe.

Gold, who says she cooks for her family nightly, learned a valuable lesson during the pandemic: “Don’t put frozen shrimp in with hot oil.” The good news is the 52-year-old was quickly able to contain the sparks. But overall, she lacks variety in her recipes and repeats the same handful, which typically include pasta. She says a pasta bacon dish is popular with her four children: Sage, 25, Bailey, 23, Aiden, 17, and Dylan, 14. But even a good recipe can get tiresome. “I made it so much, though, that some of them have actually protested it.”

On “Worst Cooks,” contestants are divided into two teams and assigned Anne Burrell or Jeff Mauro, two of Food Network’s personalities, as a mentor. As the competition proceeds, contestants are eliminated following cooking challenges until only one remains. The winner receives a $25,000 for their chosen charity.

As Gold knows, it’s no cakewalk.

“You’re really only allowed to be the worst cook that first day,” she says. “Because once you get your mentor, they expect you to start to learn and you’re not looked at anymore as the worst cook. You’ve been given valuable teaching skills from the best, and you should be able to implement that.”

“‘Worst Cooks’ was really, really hard and long and grueling at times,” she says, “even though I loved it.” But a coconut shrimp snafu caused major distress. “It was a few days in,” she explains. “I was tired. I was exhausted, and I never thought I would get upset over coconut shrimp, but here I am.”

She recovered using the principles of leadership of Girls Inc., the charity she chose to donate her winnings. Sweetin says her onscreen dad, the late Bob Saget, would “be super proud” of her participation in the culinary competition. The comedian died in January at 65 due to “blunt head trauma.”

“Bob was always the super-proud dad,” Sweetin says. “Even if we tried something and it wasn’t great, he was just always like, ‘You’ve got this. I’m so proud of you. You’re doing such a great job. You’re doing so many wonderful things, Jodes. I’m so proud of you.’ … And Bob was also very much a foodie—so he would have loved to know that I’m learning how to actually cook something.”

“Worst Cooks” provided a moment of triumph for Gold. The actress has been open about battling anorexia in the ‘90s. She says she didn’t want her recovery to be the focus, but acknowledges her eating disorder came to mind.

“I was proud of myself,” she says. “There was definitely a time in the early ‘90s I couldn’t have even participated in the show, because I couldn’t taste anything. Anne Burrell and Jeff Mauro, their main things when they are talking to you is, ‘You gotta taste, taste, taste.’ So I was tasting all the time. I couldn’t have done that back in the day. So, it was a victory for sure.”

Gold, who played for the Surfrider Foundation, says her kitchen skills “have improved a lot” since she competed. “When I go to the supermarket and I buy pre-diced onions, I feel a little guilty because I have been taught how to cut an onion.”

Sweetin also says the show upped her chef game, but she longs for the tools she had on the set kitchen that she lacks at home, and says what she learned to make doesn’t always interest her daughters, Zoie, 14, and Beatrix, 11. Instead she just makes suggestions to their resident cook, Wasilewski.