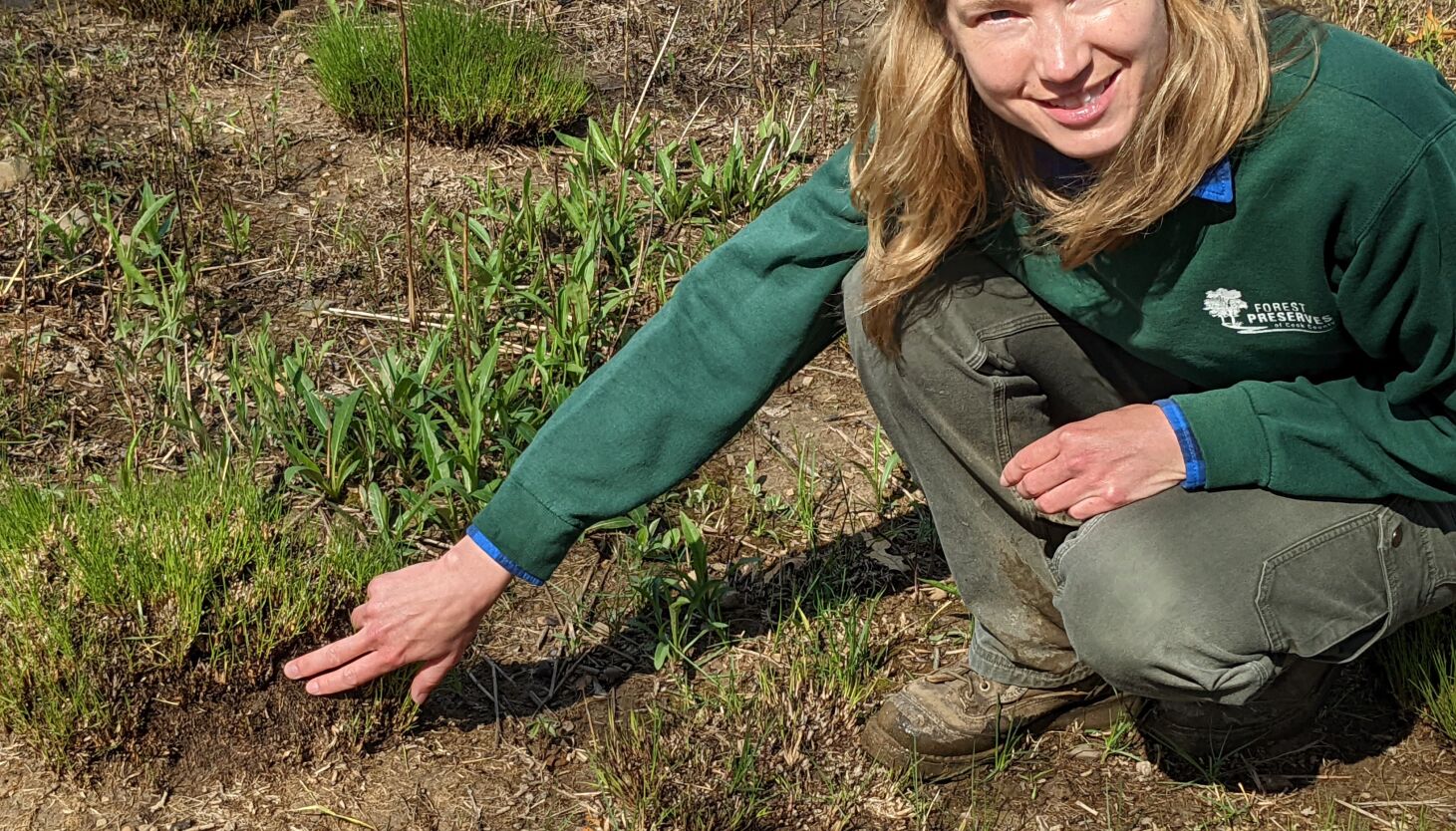 Careful what you suggest to me.

When I visited Visitation Prairie at Cap Sauers Holding Nature Preserve in November, where John Pellegrino was lead burn boss on a prescribed burn, Kristin Pink said, “You’ll have to come back in the spring and see the site.”

I accept such invites.

Considering the late spring, Cap Sauers, part of the 15,000 acres of the Forest Preserves of Cook County’s Palos Preserves, was not yet a sea of wildflowers and greening plants. That peak should be right now.

On our way into Visitation Prairie, the most isolated spot in Cook County, Pink showed an example of fire’s redemptive power. The burned side on our left was much greener than the unburned right side. In the burned area, Pink, a FPCC resource ecologist, spotted a palm warbler, then Danny O’Rourke, a FPCC resource technician, saw a yellow-romped warbler.

Burning leaf litter exposes the soil, which allows it to warm quicker. Burned leaves are recycled, in essence fertilizing the soil.

Next Pink pointed out the distinctive pink pollen in spring beauty, an ethereal early wildflower. That pink pollen matters as an early source of food for bees, which that early may be queens on the move.

Then came pussytoes, named for a similarity to cat feet; next wood betony.

When we came to clumps of prairie dropseed, Pink said, “There’s an ant nest in there. Ants are incredibly important for soil building and seed dispersal.”

Take the common blue violet, an easily spotted wildflower that spreads by several means. One method involves ants. Pink described “a fleshy appendage on the hard seed, like a little hat.”

That appendage has fats and proteins in it to attract ants.

“Ants come and eat the appendage, they drag that seed around,” Pink said. “This is an ecosystem that is thousands of years old and co-adapted.

“This place cannot be replaced. It is precious. It requires humans to protect it. Humans are part of nature, too.”

As we walked, Pink said, “Big stands are important because bees can’t depend on just one flower.”

Rue anemone was next.

Looking ahead, Pink asked, as she pointed to honeysuckle, “See that ominous line of shrubs? That’s a reminder that we cannot let up. We have to keep burning.”

The FPCC has prescribed burning to a science and regular funding to continue. Continuity is vital to maintain or restore natural spaces.

“We have prescribed burns that rival the fires in the Shawnee National Forest and we’re burning in the second most populous county in the U.S.,” Pink said.

“This plant tells us we are being successful,” Pink said. “Shooting star require scattered oaks and sunshine. This is a savanna.”

O’Rourke spotted bluebirds, a great excuse to elevate our eyes. They used natural holes in trees. While we watched them, Pink spotted a rose-breasted grosbeak.

“Come back in August and this place will be loaded,” Pink said.

In a few months, I will ramble there.

On our way out, wild plum made Pink detour.

“The flowers smell like Fruit Loops,” she said. “Smell it.”

On the way to the wild plum, I nearly stepped on a yellow wildflower. Pink found it and identified it as downy violet.

“It also has the special appendage to attract ants,” she said. “These relationships form over long periods of time. We could not replace them.

“We need to give it to the future in better condition than it was given to us.”