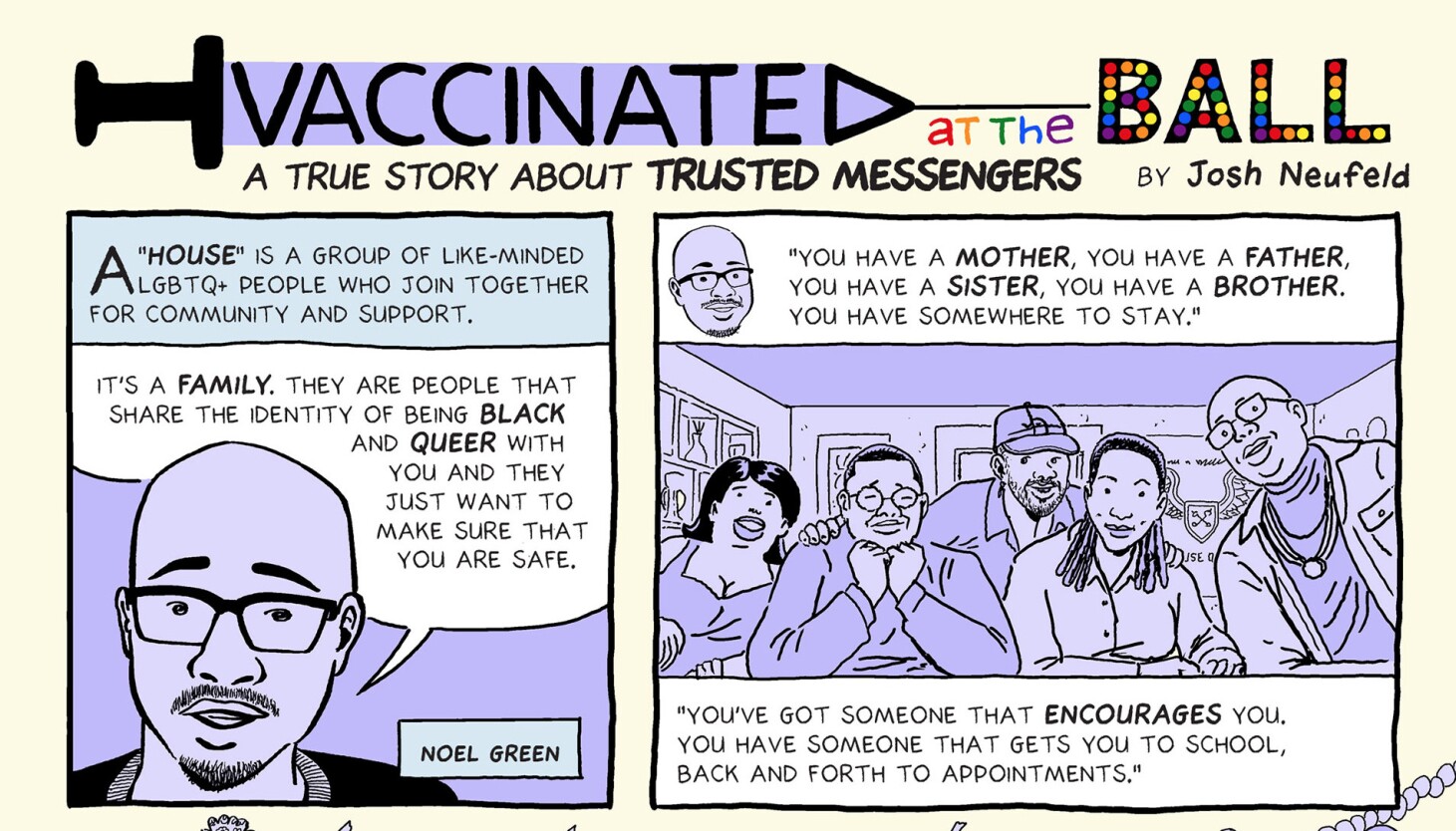 In “Vaccinated at the Ball: A True Story About Trusted Messengers,” comics journalist Josh Neufeld uses the comic-book form to tell the true story of an effort in Chicago last year to increase COVID-19 vaccination rates among Black and Latino members of the city’s LGBTQ community.

As Neufeld explains in the comic, “A house is a group of like-minded LGBTQ+ people who join together for community and support.

The main characters in the comic are five people who were co-authors of an article in the American Journal of Public Health and were involved in the effort: Randi Beth Singer, Natasha Crooks, Rebecca Singer, Noel C. Green and Jahari Stamps,

Singer, Crooks and Singer all work at the University of Illinois Chicago College of Nursing. Green is manager of outreach and care engagement at the Chicago Center for H.I.V. Elimination. And Stamps is a house “father” for the House of Ferré “and a Chicago house ball ‘legend.’ ” He’s also the grandson of Marion Stamps, the famed Cabrini Green housing activist who died in 1996.

The comic draws on the journal article and other sources, including recent interviews Neufeld did with the comic’s five main characters, whose speech-bubble quotations are from those interviews or the medical journal article.

The captions in rectangular boxes are Neufeld’s own narrative except when he uses quotation marks for a direct quotation.

“I tried to let the voices of Randi, Natasha, Rebecca, Noel and particularly Jahari guide the narrative,” Neufeld says.

The images of people attending the house balls are based largely on photos and videos of actual events. The image of #JamOutSaveLives is based on a video that appeared on Twitter and Instagram.

Panels and images in this piece that first appeared in an earlier Neufeld comic, “A Tale of Two Pandemics,” include a portrayal of mourners at a Chicago funeral. The panel representing the Tuskegee experiments is based on photos in the public record. The panel of J. Marion Sims’s experiments on enslaved Black women in the 1800s is based on a historical painting by Robert Thom. And the panels with quotes from Dr. Lisa Cooper come from a Neufeld interview in 2020.

Neufeld is also the author of “A.D.: New Orleans After the Deluge” and other works, including a comics journalism piece about social science research on consumer behavior.

“As I learned from nonfiction comics storytellers like Joe Sacco and Harvey Pekar, comics can often be used to create empathy and also to bring abstract concepts to life,” he says. “That’s why I so enjoyed the section of this story that deals with the discussion of ‘trauma-informed approaches’ and the ‘diffusion of innovation’ theory. My hope is that this piece will bring this story — and its lessons — to life in new and unexpected ways.”

This piece — republished here under a Creative Commons license —first appeared on The Journalist’s Resource, a project of Harvard Kennedy School’s Shorenstein Center on Media, Politics and Public Policy.