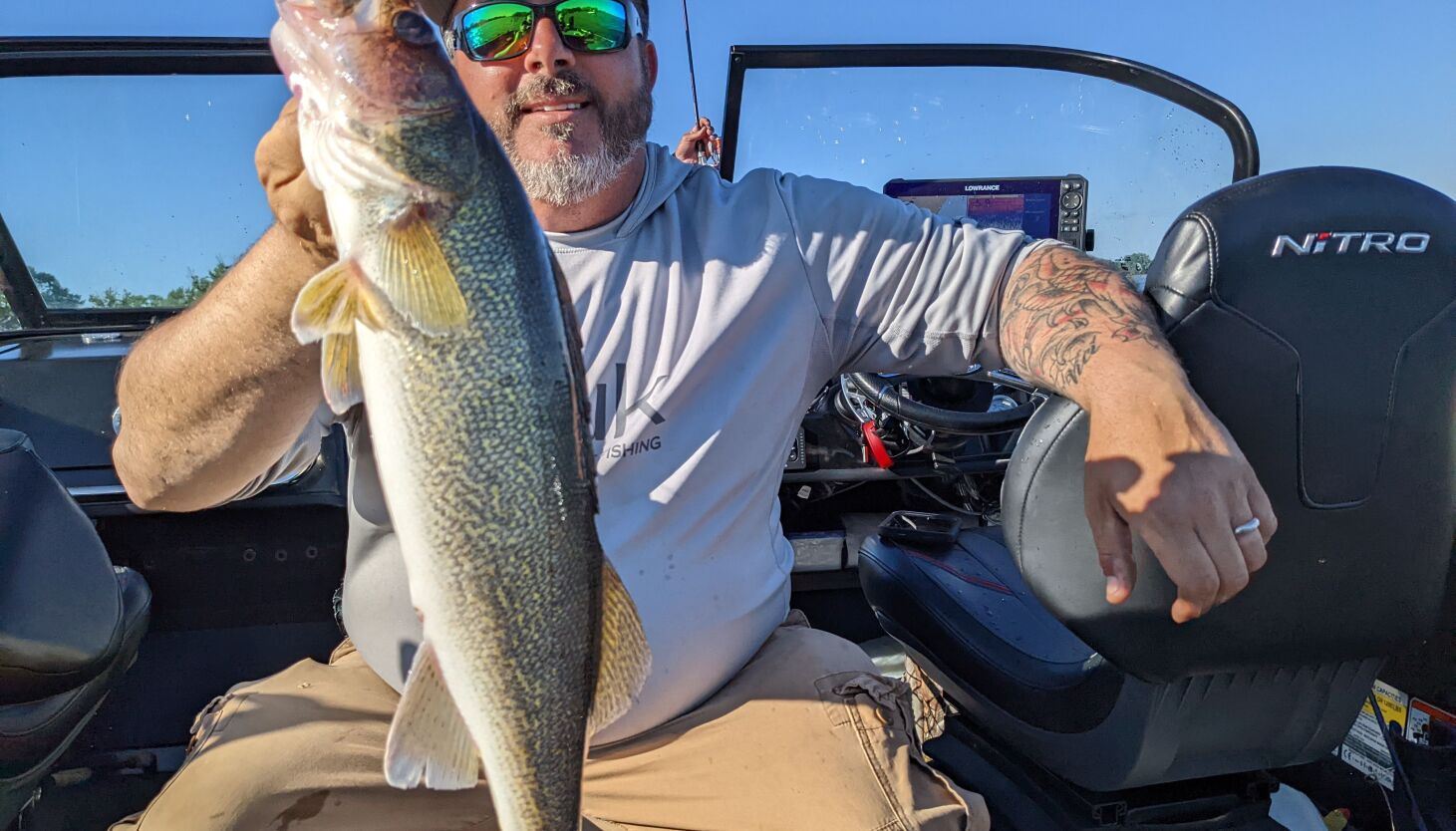 The usual flotilla of powerboats, personal watercraft and fishing boats packed the Fox Chain O’Lakes as I crossed a bridge on my way to meet Capt. Gerry Urbanozo and Capt. Anthony Zimmer.

I thought, “Whew, nothing like a Friday on a beautiful summer night on the Chain.’’

But, as we motored away from the Fox Lake American Legion, Urbanozo said, “Boat traffic is good for Chain walleye.’’

They gave a lesson Friday that good walleye fishing isn’t restricted to pristine Canadian or North Woods waters at low light, it fits the Chain’s “Party On!“ scene, too.

Urbanozo, a Lake County Forest Preserves biologist, set up the outing. I connected with him through his kayak fishing feats. Zimmer recruited him to guide with T-Bone Guide Service where Urbanozo focuses on Lake Michigan. Zimmer is a full-time guide who also does insurance.

I expected them to reschedule with clear high skies and water temperature that had climbed 13 degrees in a couple days to 81.

We started on a rock pile jigging with jumbo leeches or night crawlers.

“Fish will be here if the [Stratton Lock and Dam] gates are open,’’ Zimmer said.

Plenty showed on the side-scan sonar.

But, after 20 minutes with only a couple bites, we moved to “The Bubbler,’’ a community hole. Active walleye were there. Once I found my feel mimicking the slow retrieve on the bottom done by both of them, even I boated a few.

“On the Chain, when you are jigging, put a dead stick out,’’ Zimmer said. “The boat traffic will move it up and down.’’

It produced several walleye and big channel catfish over the evening.

Half an hour later, I boated my evening’s best, 18 1/2 inches, under similar conditions.

The Chain has a four-fish daily bag with a 14-inch minimum length and an 18- to 24-inch protected slot (no possession) with only one allowed longer than 24 inches.

If this had been a regular trip, we would have stayed on active walleye. Instead, they showed me other techniques, first jigging clam beds, then trolling rock piles and points.

Zimmer trolls with small crankbaits (Salmos, Flicker Shads) at 1.5-1.6 mph, adjusting for wind and bites. He sets bigger baits front and close with smaller crankbaits back and out.

“When I’m trolling, I will make two to three sweeps, if we don’t get them, I move,’’ Zimmer said.

Late evening the dramatic moment came. As wind shifted and increased, a rod went off. The fish went deep, then straight at the boat faster than I could reel. Zimmer shut down the trolling motor before it wrapped up, but the fish went under the boat and broke free.

Consensus was a big muskie, though none of us has seen it.

What stuck most on the night was Urbanozo saying, “On the Chain, it’s the complete opposite of walleye fishing,’’ backed by Zimmer saying, “Forget everything you know about walleye fishing when you come to the Chain.’’

As darkness came, we jigged around Fairmont Shoals, sharing the night with revelers and great blue herons.

We had caught 15 walleye, half a dozen big channel catfish, a few yellow bass, several freshwater drum and a big common carp.

The American Legion was hopping, parking lot packed, a summer Friday night on the Chain.

Multiple readers reported their first fireflies in the last week; zilch for me so far. . . . Alan Anderson had nighthawks “peenting“ near Des Plaines a couple days ago.

Truckers who can’t comprehend “Use both lanes to the merge“ are like bullheads who think a crawler chunk on a No. 10 smelled hook is lunch.