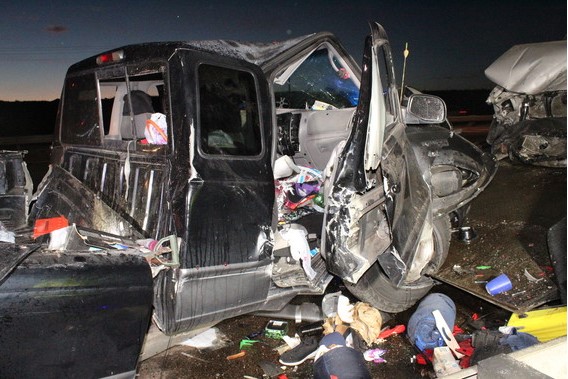 EL PASO COUNTY, Colo. (KDVR) — A Colorado State Trooper and tow truck driver nearly missed serious injuries after an intoxicated driver crashed into their vehicles while dealing with a previous crash on Interstate 25.

Trooper Dean McClain was finishing up a crash investigation that happened before midnight Tuesday near Gleneagle on I-25 when the driver of a 1998 Ford pickup truck came over from the left lane to the right shoulder and slammed into the CSP 2020 BMW patrol motorcycle and 2017 Freightliner tow truck. Both vehicles had emergency lights on but the impact of the pickup launched the motorcycle across all lanes of traffic into the center median, where it caught fire and was destroyed.

Luckily McClain and the 31-year-old tow truck driver were out of the way of the crash but were minorly injured by flying debris from the collision. The 55-year-old pickup driver, Bernard Ewertz of Greeley sustained moderate injuries and the 31-year-old Greeley woman in the car was seriously injured.

Ewertz and his passenger were transported to a local hospital and Ewertz was later arrested for driving under the influence.

“Today, we were extremely lucky this situation was not worse,” CSP Chief Colonel Matthew Packard said. “We have not always been this lucky. This is a dramatic reminder of the dangers of both not moving over, and driving under the influence.”

McClain and the Colorado Springs tow truck driver were not taken to the hospital.