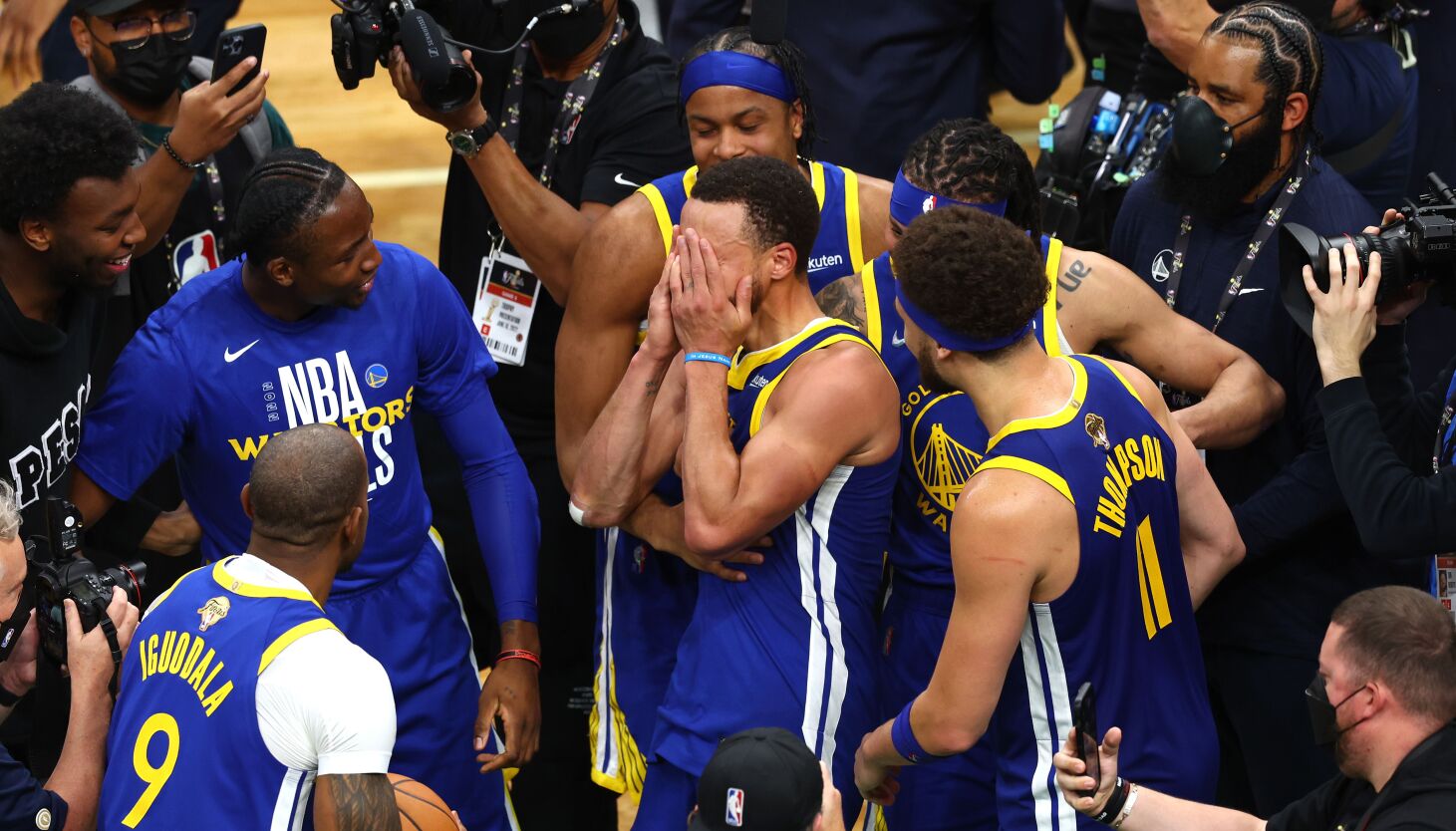 BOSTON — The Golden State Warriors are NBA champions once again, topping the Boston Celtics 103-90 on Thursday night for their fourth title in the last eight seasons.

Stephen Curry scored 34 points and was named the NBA Finals MVP as the Warriors claimed the franchise’s seventh championship overall. And this one completed a journey like none other, after a run of five consecutive finals, then a plummet to the bottom of the NBA, and now a return to greatness just two seasons after having the league’s worst record.

“We found a way to just get it done,” Curry said after the Warriors accepted the championship trophy and celebrated on the court.

With tears in his eyes and hoarse with emotion, Curry struggled to speak as he explained what allowed the Warriors to capture their latest crown.

“It’s part of a championship pedigree, our experience,” he said. “We built this for 10-11 years. That means a lot when you get to this stage.”

For Curry, Klay Thompson, Draymond Green and Andre Iguodala, it’s a fourth championship. The first three rings came in 2015, 2017 and 2018, when Golden State was dynastic and made five consecutive trips to the finals.

“They’re all unique, they’re all special,” coach Steve Kerr said of the multiple titles. “This one might have been the most unlikely. … It takes a group effort to get it done and we had a great group.”

Injuries, including ones that sidelined Thompson for 2 1/2 years, and roster changes changed everything. But this season, with Thompson returning around the midway point, the Warriors were finally back.

Back on top, too. Champions, again, denying the storied Celtics what would have been their record 18th championship, one that would have allowed Boston to break a tie with the Los Angeles Lakers for the most in league history.

This tale for the Warriors ended much differently than what was their most recent finals appearance against Toronto in 2019, one that saw Kevin Durant tear his Achilles tendon in Game 5 and then Thompson tear his ACL in what became the Raptors’ title-clincher in Game 6.

The aftermath of that loss was exacerbated by Durant’s decision to leave that summer in free agency to join the Brooklyn Nets and Thompson’s own Achilles injury while rehabilitating his knee injury.

It thrust a Golden State team into a rebuild that became a reload. The Warriors used their two-year hiatus from the NBA’s biggest stages to retool their roster – adding a past No. 1 draft pick in Andrew Wiggins, who excelled in his first finals, along with another rising star in Jordan Poole.

“This one hits different for sure knowing what the last three years meant, what it’s been like,” Curry said. “Injuries, the changing of the guard, rosters, the young guys. … Now, we got four championships. Me, Dray, Klay and Andre.

“Finally got that bad boy,” Curry added, referring to the MVP trophy. “It’s special. … Everybody mattered in that process.”

Yes, it all clicked.

Jaylen Brown led the Celtics with 34 points but Jayson Tatum finished with just 13, shooting just 6 of 18 from the field. Boston also committed 22 turnovers, dropping to 1-8 this postseason when committing 16 or more.

It was just the fifth defeat in 22 title-series appearances for Boston, which turned its season around to have a chance at this crown. Boston was 25-25 after 50 games, then went on a tear to get to the finals and nearly claim what would have been just the franchise’s second championship since 1986.

It was the third consecutive season where things were affected by the global COVID-19 pandemic, and while things were closer to normal, pictures and video of the championship celebration will serve as a forever reminder that the virus was still an issue.

NBA Commissioner Adam Silver could not be at the game because he remained in the league’s health and safety protocols related to the virus. The redesigned Larry O’Brien Trophy – the golden souvenir given to the NBA champions – was presented to the Warriors by deputy commissioner Mark Tatum instead.

Boston trailed by as many as 22 points but battled back and cut the deficit to eight. A Jaylen Brown 3-pointer made it 86-78 with 5:33 to play, but the Warriors never relinquished the lead.

Curry sent Boston fans streaming toward the exits with his sixth 3 of the night to give the Warriors a commanding 15-point lead, 96-81 — then clasped his hands against face as he ran back down the court, signaling an end to Boston’s hopes of extending the series.

“We’ve had so many great players,” Kerr said, “but Steph, ultimately is why this run happens.”

A RUN, AND A RESPONSE

The Celtics came out firing, riding the energy from a deafening TD Garden crowd to take an early 14-2 lead.

Golden State wasn’t rattled and responded with a 35-8 run that stretched into the second quarter on the way to building as much as a 22-point lead. The Warriors outscored the Celtics 27-17 for the period and carried a 54-39 lead into the second half as some Celtics fans booed the home team as they left the court.

Boston fought back in the third, but the Warriors found their range from beyond the arc, connecting on six 3s in the quarter.