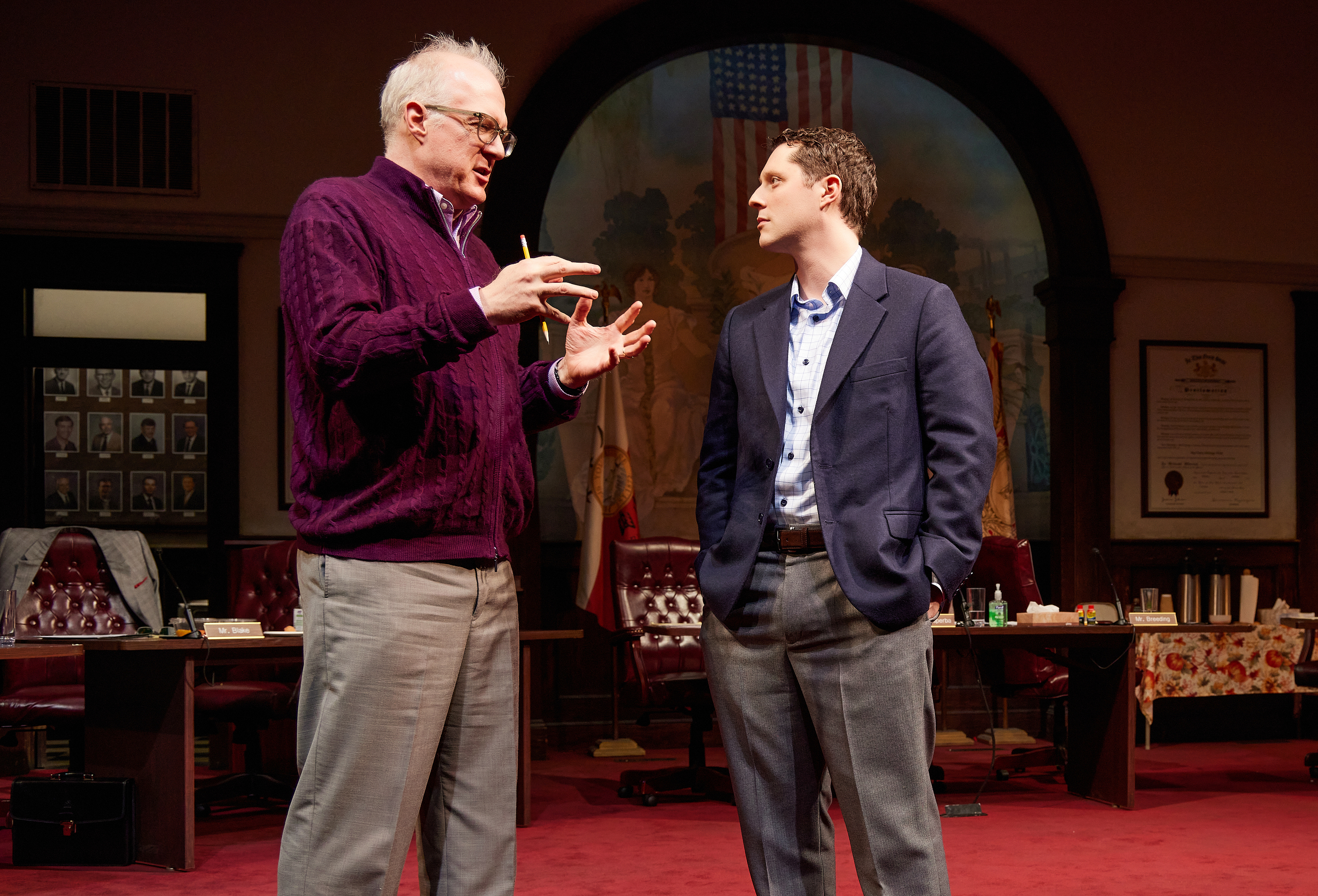 Tracy Letts won his first Tony Award in 2008 as a playwright. He gave his own gnarled family tree a good shaking, and out came a full-blooded, Pulitzer Prize-winning tragicomedy, August: Osage County. Nine years later, he won his second Tony—as an actor, playing the hen-pecked, brow-beaten George in the third Broadway revival of Edward Albee’s Who’s Afraid of Virginia Woolf?

He and Harvey Fierstein are the only two-hatted, Tony-winning storytellers in the business.

Letts may be best known right now as an actor—he’s burning up the tracks on stage and screen—but personally the 56-year-old Oklahoman finds the two roles mesh together seamlessly.

“I’ve done them both so long now I don’t know which one takes precedence over the other,” he admits. “Whenever I’m writing, I think, ‘Oh, God! It would be nice just to be an actor right now and not have to worry about all the things people will say and do.’ Then, when I’m acting, I think, ‘Oh, wouldn’t it be nice to be writing alone in my office?’ I’m very fortunate that I can do both. I don’t really consider myself more one than the other. A friend of mine calls it ‘crop rotation.’”

These days you’ll find both Letts in full sway at Studio 54 in The Minutes, a 2018 Pulitzer finalist and a 2022 Best Play Tony contender. It’s a satire of small-town bureaucracy that grows progressively darker as it careens toward a frenzied finale. Letts wrote this play during the 2016 political campaign at the first flicker of Trumpism, and you can sense his blood boiling.

The COVID-19 lockdown stopped The Minutes from ticking three days before its 2020 premiere—back then, the play was at the Cort Theater, and the lead was Armie Hammer—and in the long, long interval that followed, manifestations of today’s uncivil political realities became plentiful.

“I’m sad to see how much of it has come true,” Letts says. “After we were shut down, a lot of the actors got on a text-thread with each other just to keep in touch, and, as each of these incidents happened—whether it was removing statues or rewriting the history books or fudging some version of history—we’d write each other and say, ‘Can you believe this stuff is really happening?’

“It’d rather be wrong. I’d rather people look at my play and say, ‘Boy! He sure got that wrong.’ I’d rather be the one who’s wrong and have a better world than have all this stuff come true.”

The Minutes has been cast with a mix of Steppenwolf and Broadway actors—plus Noah Reid, late of Schitt’s Creek and the Hammer replacement, who plays a Mr. Peel, the city council freshman who has questions about the last city council meeting, primarily because one of his colleagues, a Mr. Carp (Ian Barford), is missing in action, along with the minutes of the last meeting. It seems he’s been eliminated—just how eliminated remains to be seen. In time, Mr. Peel peels back the truth and discovers what Mr. Carp had to carp about. (Helpfully, Letts names his characters according to their plot functions.)

The Minutes is set in the small town of Big Cherry, and presiding over the city council meeting in a pompous and controlling fashion is one Mayor Superba, otherwise known as Our Playwright. And who elected Letts mayor? you ask. “The good people of Big Cherry,” he shoots back. Actually, truth to tell, it’s a job nobody wanted. “I happened because William Petersen, an active member of Steppenwolf who did the part in Chicago and was superb, didn’t want to do it in New York,” explained the author-actor. “It wasn’t a good fit for him, so we started trying to find a replacement. We offered it to a lot of people, and they all turned it down. We finally got to a point on the list where I said, ‘Well, I’ll do it then.’” A star, by default, is born.

Of all the small-town eccentrics that people this play, Letts says he had the most fun writing Ms. Innes, the role Blair Brown plays. “I seem to have some feeling for that character’s voice, and that continually took me by surprise. You could sorta feel the audience go, ‘Oh, I know that one. I know who she is.’ That’s a good feeling, to know that you have put your finger on something.”

The sneakiest scene-stealer of the lot is Mr. Oldfield, the senior council member (he’s served for the last 39 years, and is brain-fogged because of it). His overriding concern is securing the parking space that Mr. Carp seems to have suddenly vacated, and he zeroes in on that like a commando in World War II movie. Austin Pendleton plays the role, hysterically, in a performance that just earned him the Actors’ Equity Richard Seff Award and an Outer Critics Circle nomination. “Austin is such a gifted actor,” says Letts. “He’s not just there to get the laughs, though he pretty much gets a laugh on every line he has. He’s been doing this a long time. He knows what he is doing.”

Directing the play is Steppenwolf’s Anna D. Shapiro, a veteran Letts campaigner (they won Tonys together for August: Osage County). “It’s such a close relationship at this point,” says Letts. “For instance, casting Noah Reid as Peel was really all Anna. I’ve still never seen Schitt’s Creek, but Anna insisted. She said, ‘He’s not only the guy to open our show, he’s the best casting we’ve ever had in this part.’ There’s no other director I would let get away with that. I’d say, ‘Well, I’m going to have to see him’ or ‘He’s going to have to read.’ Instead, with Anna, I just say, ‘Yes, please.’”

The Minutes starts out a gently amusing political comedy, then abruptly and harshly takes a sharp right turn into a pitch-black horror-show. An abiding legend of the Big Cherry settlers triumphing over the Indians is a fixed myth taught in schools and acted out in spur-of-the-moment pageants. Even the name of this “wet sock of a town,” Big Cherry, is revealed to have a negative, bigoted undertone.

This could be Oklahoma guilt on Letts’ part. “I’m born and raised in Oklahoma, and I carry it with me wherever I go, but I’m careful not to identify the state,” he says of the setting of The Minutes. “If I identified it as Oklahoma, the good people of Kansas would say, ‘That’s not us,’ and I want everybody to think that it’s their state.

“I have to say that that sharp turn was always part of the conception of the play. I can never write a play unless I know what the ending is before I start it, so I always knew we were going to take that very sharp turn into dark territory. There’s something about a sharp shift into the unexpected for the audience. As much as they might feel they know where the play is going, I don’t think that they necessarily know it’s going to quite that place. I always enjoy taking the audience to that place. Sometimes they want to come with you, and sometimes they don’t.

“I look for that kind of split-personality in individual audience members. It’s also good for starting fights as people leave the theater. People have pretty hearty disagreements about what they’ve seen or whether they like what they’ve seen. That makes me happy. I want to write a play that engenders discussion and argument rather than a play that’s easily tied up and dismissed.” 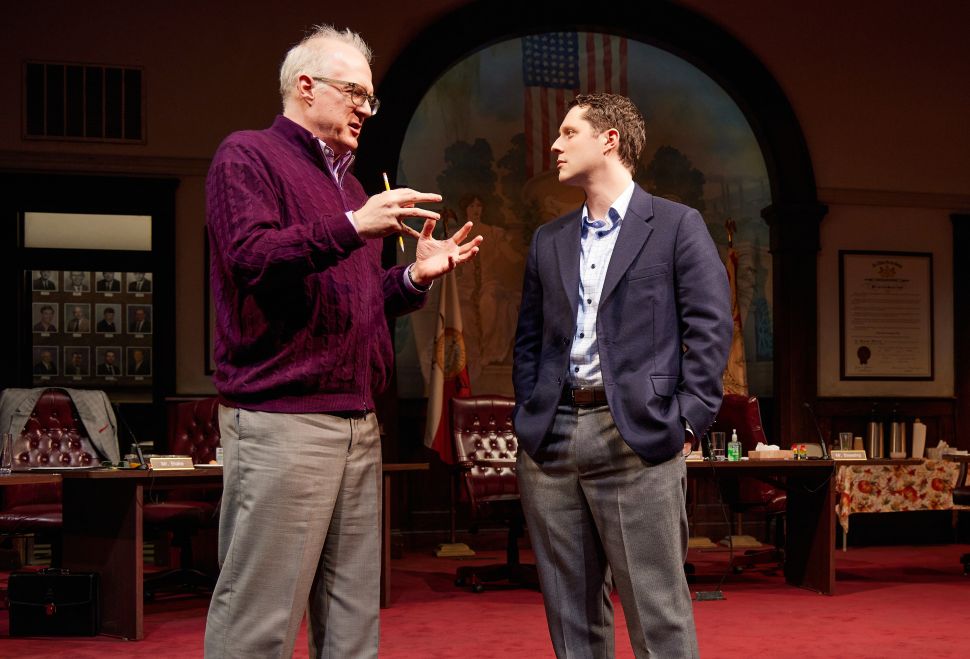