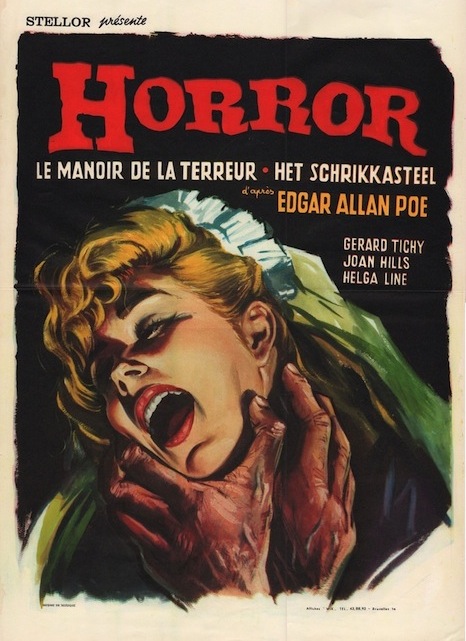 The Blancheville Monster is being released on Blu-ray by Arrow Video as part of the four-film limited edition Gothic Fantastico box set which is due out on October 17, 2022.

“While groundbreaking director Mario Bava (Black Sunday, Black Sabbath) remains the most well-known purveyor of Italian Gothic horror, many other filmmakers tried their hand at the form throughout the 1960s as part of a hugely prolific and popular cycle. Gothic Fantastico presents four off-the-beaten-path titles from this classic period, all of which demonstrate Italy’s ability to expand genre beyond the classic literary monsters that dominated elsewhere.

Madness, obsession and messed-up families are the order of the day in these four lesser-known monochrome gems from Italy’s peak Gothic period, now fully restored in 2K from their original camera negatives for the first time and presented alongside an array of in-depth extras.”

Meanwhile, here’s our previous coverage of the movie from November 2013:

The Blancheville Monster is a 1963 Italian/Spanish horror film directed by Alberto De Martino [as Martin Herbert] (Formula for a Murder; Blood Link; Holocaust 2000; The Antichrist) from a screenplay written by Bruno Corbucci, Sergio Corbucci and Giovanni Grimald, allegedly based loosely upon an (uncredited) story by Edgar Allan Poe. Produced by Alberto Aguilera. Also released as Horror

The original version is set in Scotland, however, the US version chose to transpose the events to Brittany, France.

Plot:
1884: Emily Blackford returns to her ancestral home after finishing school to find that her brother has sacked the entire staff and all the new servants act suspiciously. Her father – whom she had believed to be killed in a fire – is discovered to be alive but ‘horribly disfigured’ and has been driven insane. The family keep him locked up in the tower.

It transpires that there is a curse on the Blackford line, and their father believes that the curse can only be broken if Emily is killed before her 21st birthday…

Reviews:
“It’s filled with tiresome exposition and moves at a plodding pace. Even ardent Gothic horror fans may be hard-pressed to find much of exception, excluding the beautiful, yet foreboding, architecture of the old castle itself. And despite having Edgar Allan Poe’s name attached to its original title, the film has little to nothing to do with his stories.” B&S About Movies

“The film drags at times and leans more towards mystery than horror, but it’s an atmospheric late-night type chiller that fans of 60s Italian goth will not want to do without. The eerie music is by Carlo Franci, who also scored a lot of gladiator movies.” DVD Drive-In

“Horror is rather lugubriously paced and could have profited from at least ten minutes of 90 minutes being shaved off. Gratifyingly, however, De Martino lays the atmosphere on thick…” Jonathan Rigby, Euro Gothic: Classics of Continental Horror Cinema

“Fun aspects here include: Roderick’s great harpsichord playing; some fantastic sets including the old manor house and the ruined abbey nearby; a great spookshow sequence with Lady Blancheville’s friend wandering through the darkened manor and finding her way to the tower with some genuinely creepy moments; and the Scooby-Doo mystery of the scar-faced man, which wasn’t too hard to figure out but still fun …” Mad Mad Mad Mad Movies

“Alberto De Martino creates some great Gothic images – the hooded, burn-scarred figure of the father hovering over Ombretta Colli’s bed; Ombretta wandering through the grounds in a nightgown with candelabra […] On the other hand, Alberto De Martino shows he is not Mario Bava anywhere outside of these scenes where the film slows down and becomes prosaic and talky.” Moria

“Playing with ideas handled better in Hammer Films’ Demons of the Mind (1972), the Scooby-Doo-like mystery unusually juggles multiple love triangles and has trouble settling on a definitive protagonist. Initially, the plot seems centred around Emily and John but it turns out to be Alice that does the detective work whilst wooed by two shifty suitors. Everything ambles along amiably if unspectacularly before bowing out with a fairly suspenseful climax.” The Spinning Image

“The Blancheville Monster is quite atmospheric and it benefits a lot from the amazing, spooky castle and the fetching ladies. A few scenes are really good. But as a whole, well, this is nothing special.” Xomba.com

“The Blancheville Monster does not have much to offer other than De Martino’s competent direction, atmospheric set-pieces (including the ruined monastery that would be featured in the 1970s Spanish horror films) and Alejandro Ulloa’s atmospheric lighting […] the horrific moments, so to speak, are also quite awkward with a grotesque looking monster and naive shock cuts underlined by Carlo Franci’s melodramatic score…” Roberto Curti, Italian Gothic Horror Films, 1957 – 1969

DVD release:
On November 19, 2013, the film was released in the US by Retromedia as a 50th Anniversary DVD in 1:66:1 widescreen and in high definition.

Buy Italian Horror Films of the 1960s from Amazon.com

Visitor rating! Press a star to vote what you think of this movie!