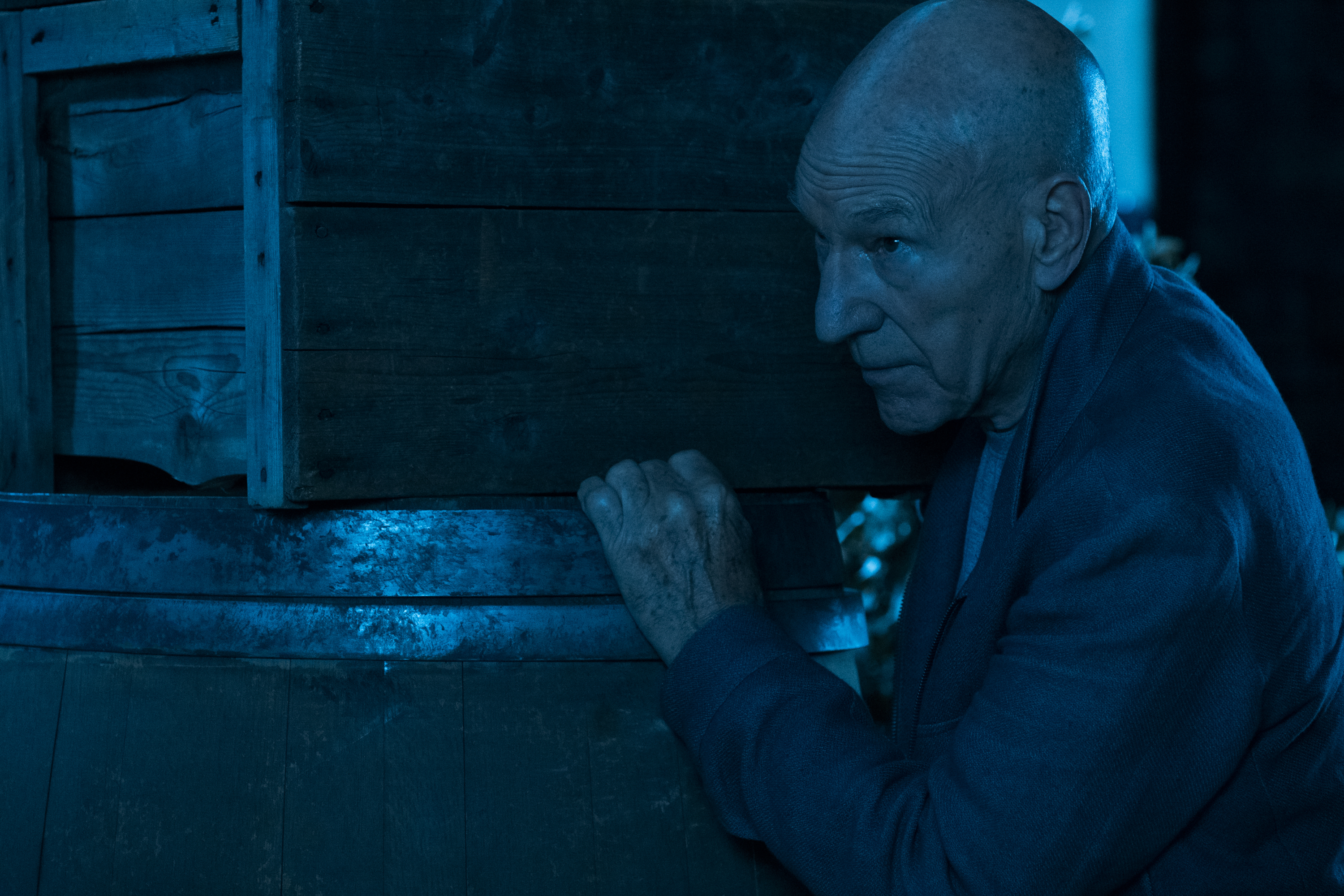 After a few weeks of dragging its feet, Star Trek: Picard delivers an action-heavy penultimate chapter that brings nearly all of the season’s ongoing threads together. The road to the climax hasn’t been the smoothest, but this ten-hour Trek is finally beginning to pay off with the simultaneously explosive and introspective “Hide and Seek.” The episode resolves multiple season-long subplots in a way that is acceptable, but would be more satisfying had they been set up with more care.

The best of the bunch is, unsurprisingly, the thread that’s gotten the most attention: Picard’s repressed memories from his childhood. While sneaking through the tunnels beneath Chateau Picard to evade Adam Soong’s quasi-Borg strike force, Jean-Luc recalls the complete series of events that inspired his fantasy-infused flashback from back in “Monsters.” As implied in that episode, there’s more to this story than Picard had allowed himself to relive during his coma dream. That memory concluded when his father Maurice (James Callis) locked his mother Yvette (Madeline Wise) away during a manic episode. By the end of “Hide and Seek,” we learn that young Jean-Luc let her out and that, later that night, she took her own life.

This season has been occupied with tracing the origins of Picard’s fear of intimacy back to a key moment in his past. Giving this well-explored character a new, defining childhood trauma is a tall order to begin with, especially since his hesitancy to commit to a romantic relationship has always been presented as a consequence of his career. However, if you’re going to give him a deeper psychological wound that informs his choices throughout his life, it should have some heft and some texture, and I think the storytellers have done this. In “Monsters,” we see Picard confront a mental projection of his father, who he’s always remembered as an abusive husband who crushed his mother’s spirit. There’s the implication that Picard has lived with the fear of finding that same darkness in himself and smothering any partner who comes close enough, but that alone wouldn’t be totally convincing. We’ve known Picard for over 30 years, and he’s never revealed a hint of his father’s bitterness in any of his relationships. That doesn’t mean it can’t be something he fears, but it does make it a weak emotional hook for his character.

The reveal that he unknowingly aided his mother’s suicide, however, has a bit more resonance to it. Once, as a boy, Picard made a decision purely out of love that had tragic results. Too young to understand that none of this is his fault, he decided that the way to avoid repeating this heartbreak was to keep that metaphorical door to his heart closed, even (or especially) when someone comes knocking. In an effort to abide by his mother’s last wishes, he buries this memory and, unconfronted, it quietly guides his behavior throughout his life. This is the level of deep-seated wound that works, a specific enough moment to leave a powerful impact but a vague enough lesson that it can fit in with what we know about the character. Still, Picard’s admission that he’s often fantasized about seeing his mother as an old woman—a nod to her appearance as a manifested figment of his imagination in an early Next Generation episode—might have been more meaningful if we’d also seen Old Yvette this season, perhaps while exploring his subconscious back in “Monsters.” Instead of folding this retcon into the story as a mislead that deepens the mystery, the storytellers merely throw in a bit of dialogue to assure die-hard fans that they haven’t forgotten her earlier cameo.

The story of Dr. Agnes Jurati and the Borg Queen is also mostly resolved this week. After a heated battle aboard La Sirena, the Queen is about to land a killing blow on Seven of Nine, but the emotional distress that this causes Jurati’s body allows her to assert some control. Putting the fight on hold, Jurati pitches the Queen a radical new strategy that she believes will prevent the Borg’s defeat in both the Prime and Confederation timelines: rebuilding as a true collective of willing participants. Instead of mindless drones acting out the Queen’s commands, these new Borg would be individuals joined in both thought and purpose, empowered with the benefits of Borg implants and none of their weaknesses. Agnes argues that there’s already an example of her ideal Borg in Seven of Nine, a brilliant, daring, selfless hero who they have both, at one time, loved. Intrigued by this proposal, Queen Agnes, now one being, drops off the rest of the crew and takes off into space aboard La Sirena to attempt this experiment. (We have likely seen the results of this already, in the season premiere, and will almost certainly see it again in the finale.)

This story, too, has found an ending that works. This season has reframed the Borg Queen as driven by the desire for connection more than the desire for power. She has already experienced the rise and apparently inevitable fall of her empire across multiple timelines, and with the added, outsized influence of Agnes in her mind, it’s not unthinkable that she might be willing to try something new. It’s also an intriguing idea on a narrative level to shake up the Borg, who have become less and less effective as outright villains over time. While the initial depiction of the Borg as an unstoppable force of nature will likely always be the coolest and most iconic, we’re now decades removed from it, and new Star Trek stories should be pushing forward, not looking for routes backward. Queen Jurati restoring Seven of Nine’s Borg implants in order to save her life also dovetails nicely with Seven’s arc for the season. Seven’s story may not have gotten much time in the foreground, but the show has never lost sight of the effect that living as a human for the first time has had on her. For her to become Borg again, just as she was, but as an example of a better future for the universe, helps her to become more accepting of herself.

What’s missing from this equation is connective tissue between Seven and the Queen, and especially between Seven and Jurati. The entire fate of the galaxy hinges on Agnes and the Queen’s shared admiration for Seven, but neither character has spent practically any time with her this season. While fans of Voyager are certainly acquainted with Seven and the Queen’s twisted mother/daughter relationship, there’s been little to reestablish it in this series. Worse, Seven and Agnes have never really had a story together. They certainly respect each other as colleagues, but there’s never really been any attempt to establish a specific dynamic between them on screen. This doesn’t outright kill the impact of this episode’s climactic scene, but it does limit it significantly.

The episode’s weakest element is Dr. Adam Soong’s pursuit of Picard and Tallinn through the Chateau’s catacombs. Soong is a boring antagonist compared to the Borg Queen, and he’s stuck delivering some generic and uninspiring villain speeches. It doesn’t help that he’s flanked by an army of nondescript soldiers who have apparently received no benefits whatsoever from being crudely assimilated by the Borg Queen. Seeing them dispensed with by Raffi and Seven or a sword-wielding holographic Elnor is good fun, but it doesn’t do much to fight the perception that Dr. Soong is a born loser who accomplishes nothing on his own or even with extraterrestrial help. This is a problem, given that he’s our remaining threat for the season finale. He still plans to sabotage Renée Picard’s Europa Mission, but it’s hard to imagine him amounting to anything more than a nuisance, a distraction from the real main event that is the final meeting between Picard and Q. Still, this penultimate episode goes a long way towards rewarding the experience of this season as a whole, and provides some hope that the finale will not only wrap things up nicely but also leave the characters and the Star Trek universe in a new, more interesting place. 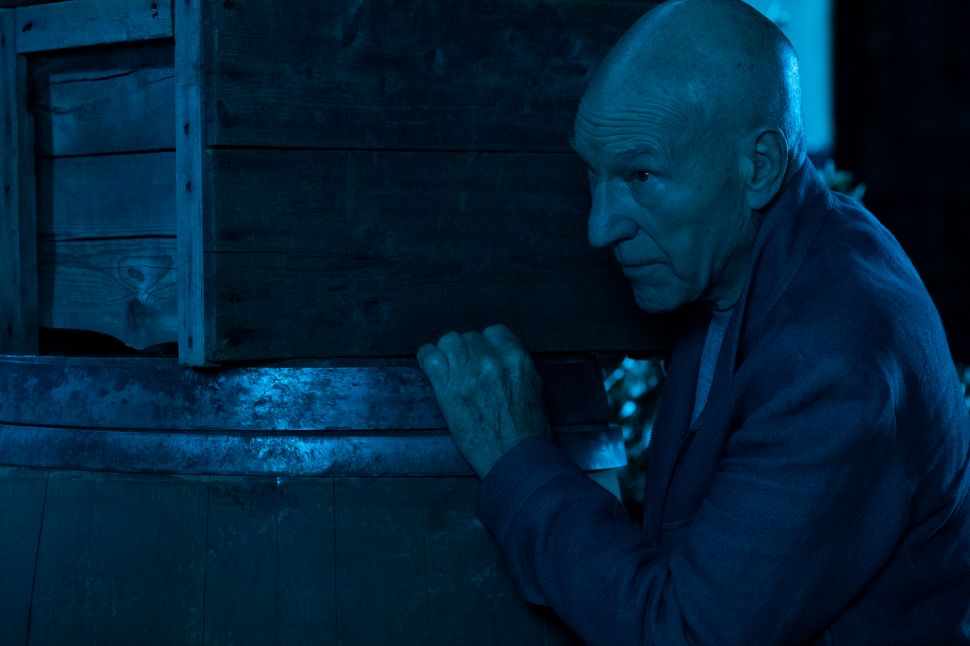