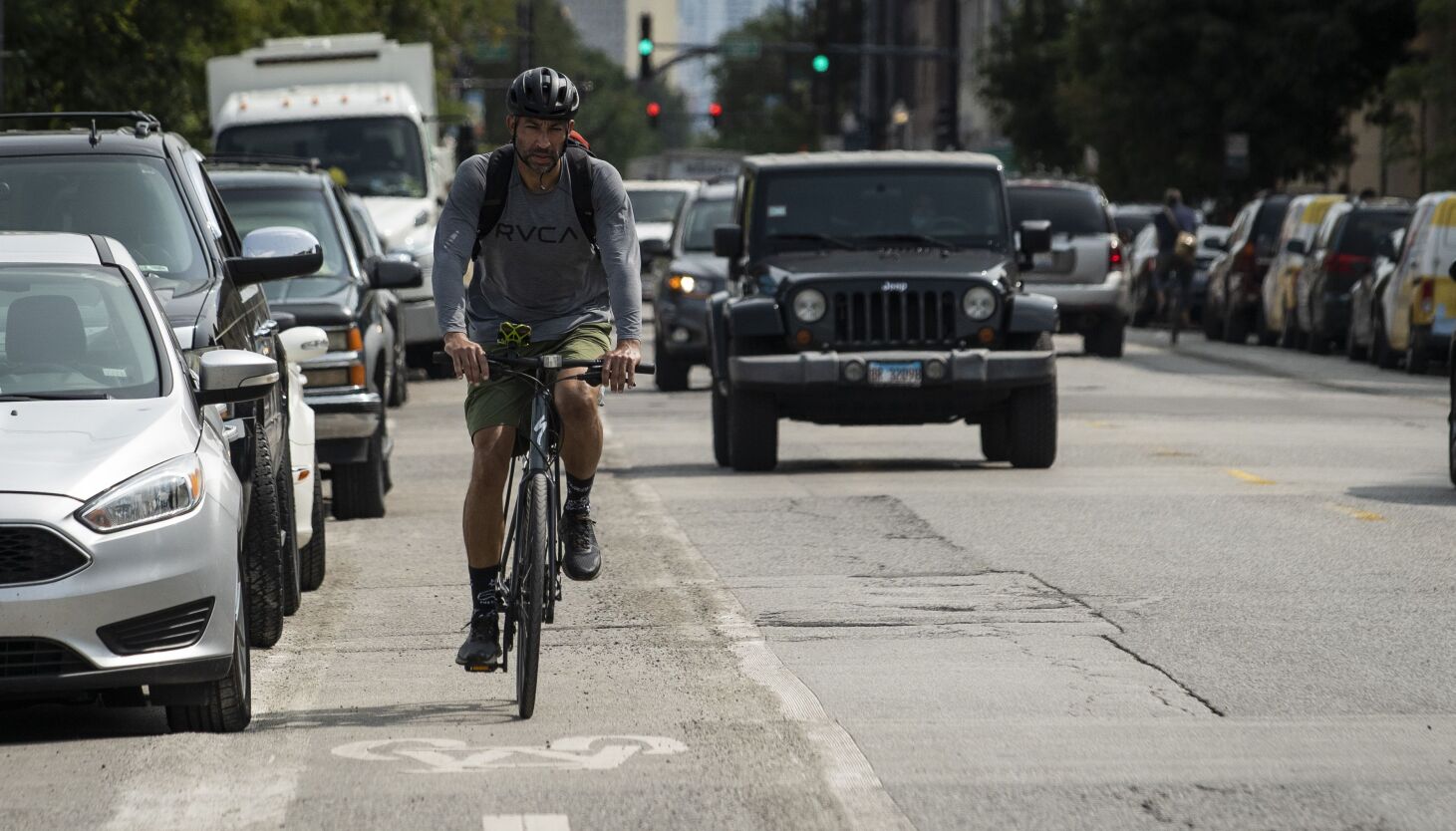 I woke up one recent morning to tragic, yet all too familiar news: Another person, Nick Parlingayan, was hit by a driver and killed while riding his bike in Chicago.

Just devastating. This crash, like so many others, could have been prevented if we invested in building safer streets for people.

When I saw the location of the crash — Milwaukee and Kilbourn avenues — it gave me further pause. Just two weeks earlier, I was at this intersection talking to a reporter about how the design of the street and lack of safe bike infrastructure contributed to the death of Carla Aiello while she was riding her bike in 2019. Now it had happened again.

To get to the meeting, I decided what better route than Milwaukee Avenue, dubbed Chicago’s biking superhighway? Aside from the Lakefront Trail, the 606 and Dearborn Street, you might expect this to be Chicago’s bicycle infrastructure at its best. Unfortunately, this is far from the case.

On the first stretch of Milwaukee Avenue, many of the plastic bollards the city uses to separate vehicles from cyclists and pedestrians are damaged, knocked over or entirely detached from their base. They may prevent the vehicles that crash into them from getting damaged, but they do nothing to protect bikers.

For the next 10 miles I was forced in and out of the traffic lane because private vehicles or construction equipment blocked the bike lane. When a bike lane is not protected adequately it becomes a parking lane, dangerously forcing cyclists into vehicle traffic.

As I entered Wicker Park, where there’s just a narrow bike lane marked with paint, I biked slowly, on alert for car doors opening. Anyone, including myself, who has had a car door fly open in their path while biking treats these narrow spaces with caution. People biking on Chicago’s busiest biking street get a hazardous sliver of space to ride. We must do better.

As I continued north through Logan Square, there’s no bike infrastructure of any sort, despite it being one of the most popular neighborhoods for bicyclists.

Nearing Old Irving Park, the end of my trip, I passed Schurz High School, where the entire bike lane was filled with parked cars, a daily occurrence. Students who wish to safely cycle to school are out of luck, as are any other people biking by on Milwaukee Avenue. The most harrowing stretch of my ride was just past the high school, where vehicles and cyclists must travel under a train viaduct. Current construction underneath the bridge makes it even worse, forcing cyclists to share the road with fast-moving truck and car traffic. I’ve commuted thousands of miles by bike in my lifetime and roadway designs like this continue to cause my heart to skip a beat.

Nick was killed on this same block by a hit-and-run driver, a death that was completely preventable had the street been designed with safety — not parking, not speed — as the guiding principle.

We must do better, and urgently.

The city’s bike plan, released in 2012, identifies Milwaukee Avenue as one of seven “spoke routes” to connect communities. The plan calls for barrier-protected bike lanes all along the corridor. Yet today, only 1.4 miles of the 11-mile corridor feature protected bike lanes — and poorly protected at that. Flexible plastic posts are not protective barriers. Long stretches of Milwaukee Avenue contain only faded paint that do absolutely nothing to protect people biking.

The hazardous biking conditions on Milwaukee Avenue illustrate a much larger problem: the lack of an overall safe bike network. Even on key bike routes, there’s often nothing but paint or crushed plastic to protect you. Ten years ago, the city created a good plan with public input to remedy this. Tragically, many of the goals outlined have never been realized.

No one should die because they ride a bike to get around. Bike lanes must be protected and separated from heavy, fast-moving vehicles. Those lanes need to be seamlessly connected to enable people of all ages and abilities to safely and conveniently get where they need to go. We don’t live in self-contained neighborhoods — we travel to our jobs, to school, to receive healthcare, to be with friends and family, to enjoy a festival or concert or our beautiful lakefront.

It is well past time to create a safe, connected bike network.

Amy Rynell is executive director of the Active Transportation Alliance.