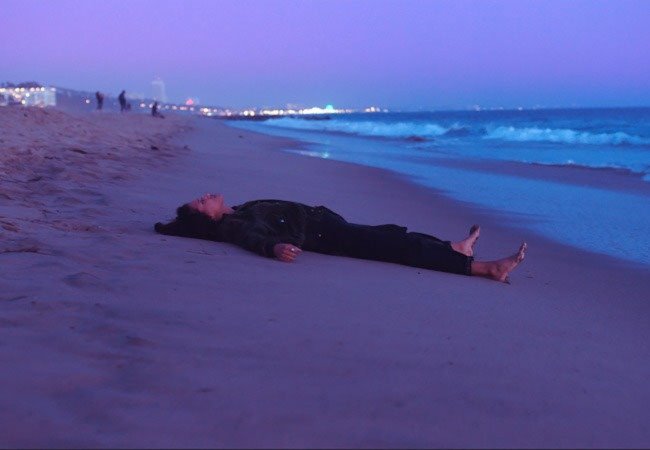 NewFilmmakers Los Angeles celebrated emerging LGBTQ+ cinema with stories that included a gay couple experimenting with a throuple relationship, ex-lovers reuniting for one last time, and a gang standoff that leads to romance.

The day began with an InFocus: Disability celebration of the finalists of this year’s Easterseals Disability Film Challenge with a screening of all of the finalist films. It continued with InFocus: LGBTQ+ Cinema Shorts I, a program that explores personal and community journeys in poignant, funny and powerful ways. The evening continued with the L.A. premiere of writer-director Stacey Maltin’s feature film Triple Threat, a musical dramedy that turns gendered tropes about dreams and the meaning of success on their head. The evening concluded with InFocus: LGBTQ+ Cinema Shorts II, a collection centered on relationships, the ways we imagine them and the ways they are in reality in all their messy glory.

NFMLA showcases films by filmmakers of all backgrounds throughout the year in addition to its special InFocus programming, which celebrates diversity, inclusion, and region. All filmmakers are welcome and encouraged to submit their projects which will be considered for all upcoming NFMLA Festivals, regardless of the InFocus programming.

Here is some information on the filmmakers and their films, as well as their video interviews with NFMLA Board Chair Danny De Lillo (Twitter/Instagram: @dannydelillo).

About Stacey: Maltin is an award-winning filmmaker. Landing Up, which she wrote, produced and starred in, was distributed by The Orchard and was in the Top 10 independent films on iTunes among titles including The Danish Girl and The Grand Budapest Hotel. Her pilot Linked premiered at Oscar-qualifying Cinequest and received nominations for Best Episodic pilot at festivals. Her feature script Head, based on a short she directed that premiered at NewFest Film Festival, was a finalist at the Outfest screenwriting lab. Her feature script The Other Side was produced by The Blcklst as a radio podcast and starred Maltin, Darren Criss, Jerry Adler and Eddie Kaye Thomas. She is co-founder of Besties Make Movies and WIWU Productions.

About Margarita: Margarita Zhitnikova (they/them) is a Russian/Jewish award-winning actor and filmmaker. As a child, Margarita and their family moved to Brooklyn from Russia as Jewish refugees. In 2017 Margarita co-founded their independent production company Besties Make Movies. They wrote, produced and starred in the short films Jones and 2 Weeks. Jones is an award-winning film that continues to garner nominations at festivals across the country. 2 Weeks was an Official Screenplay Selection at the prestigious HollyShorts Film Festival and will be premiering at the Oxford Film Festival. As an actor, Margarita was nominated for Best Actress at Twister Alley International Film, Gig Harbor Film Festival, FirstGlance Film Festival, and Simply Indie Film Festival for their work in Jones. They recently wrapped filming the leading role of Maggie in the feature Triple Threat and the leading role of Tanya in the short film Appetite.

About Triple Threat: A relationship between three best friends—on the verge of their Broadway debut—is put to the test when diverging dreams meet the realities of adulthood.

“Love in the Time of Corona,” directed by Lila Schmitz

About Lila: Lila Schmitz is a filmmaker with experience making independent films from scratch and working on big budget projects as a part of a huge team. Her first feature The Job of Songs, an Irish music documentary that she directed, produced and edited, premiered at DOC NYC in 2021. Her short documentary “Jaiel” aired on PBS, as did her short fiction film Queer Qafe, which has since gotten 50,000 views. Schmitz recently directed three music videos for the titular artist of her short documentary, Jaiel. Her latest short film “Love in the Time of Corona” has played LGBTQ+ festivals all over the United States. She has been producing in the documentary world (for PBS, CBS, Richard Linklater, Bill Guttentag) and spent the last year working at Anonymous Content.

Watch the NFMLA interview with Lila Schmitz, director of “Love in the Time of Corona”:

“I Wish I Never Fucking Met You,” directed by Jacob Charton

About Jacob: Jacob Charton is a queer Mexican Jewish director-writer in Los Angeles. At the age of 21, Jacob wrote and directed “True to You,” a visually poetic one-minute short film. At such a short runtime, Jacob’s intention was to only publish the film to Instagram as a quick and effective way to come out to his friends and family. A year later, the film premiered at Outfest Fusion Film Festival Los Angeles. His films are soft, emotional portraits exploring identity, love, and heritage. Jacob is a fellow of Outfest Film Festival’s “OutSet” Conservatory Film Fellowship Program.

About “I Wish I Never Fucking Met You”: On a neon-lit Los Angeles night, two young men reunite and discuss their complicated relationship.

Watch the NFMLA interview with Jacob Charton, director  of  “I Wish I Never Fucking Met You”:

About Stacey: Stacy Jill Calvert is originally from Chicago, but has called Los Angeles home for over 20 years. She works as a writer, director and producer for film, television and live events. She is currently in pre-production for her first feature film, directing the Queer rom-com, “Her Curve.” The film is based on the graphic novel. “Grace” by Eisner Award Nominee Kris Dresen and adapted by Lambda Lit & ALA Finalist JD Glass for the screen. Stacy earned her MFA in Media Arts in 2015 from Southern Illinois University in Carbondale, Illinois.

About: Becca is about to have her Bat Mitzvah, but her Nana insists she does one thing first: get a “real bra.”

Watch the NFMLA interview with Stacey Jill Calvert director of “The Bra Mitzvah”:

About L.E: Lewis E.Woods is an up-and-coming director whose goal is to create, inspire, and spread love through a cinematic lens. Raised in Greensboro, North Carolina, Lewis started his passion for filmmaking at an early age, inspired by movies such as The Last Dragon and The Goonies. Fresh out of school, Lewis worked for companies such as Disney World Resorts, Universal Studios and Royal Caribbean Cruise Lines, where he polished his skills as a performer and actor. In 2017, Lewis finally took the leap and moved to Los Angeles, where he started directing. “Somnium” is Lewis’ second directorial short film.

About “Somnium”: A couple’s deepest traumas personify into sinister creatures after they embark on a psychedelic trip.

Watch the NFMLA interview with L.E Woods  director of “Somnium”:

About Fiona: Fiona Kida is a Tanzanian-American filmmaker and musician from Nashville, now based in Los Angeles. She graduated from USC, majoring in Film & TV Production. She has worked as an associate producer at Google’s Creative Lab in New York City and as an Office PA at Annapurna, and interned at Bad Robot, NBCUniversal, and Pixomondo. She’s produced shorts that have screened at more than 30 international festivals and been nominated for a Student Emmy in directing. Last year, a feature she wrote got into the 2nd round of Sundance’s 2021 Dev Track. In addition, she won the 2021 WAVE Grant for “Blue Hour,” which she wrote, directed, produced, and composed the music for.

About “Blue Hour”: Mel’s plans to confess her love to her close friend June are soon upended.

Watch the NFMLA interview with Fiona Kida  of “Blue Hour”:

“We All Die Alone,” directed by Jonathan Hammond

About Jonathan: Jonathan Hammond is a two-time Emmy nominated writer/director. He is the co-recipient of grants from the National Endowment for the Arts and the Joan B. Kroc Institute for Justice and Peace. He is also the recipient of the San Diego Film Award for Best Writing, two consecutive San Diego Film Con Challenge wins for Best Film, four San Diego 48-Hour Film Project Awards for Audience Choice, a two-time KPBS Explorer recipient, and a WOMAS award for Best Screenplay. He won for Best Writing at the 2016 San Diego International Fringe Festival and his work was selected for the New Playwrights Festival at The Old Globe. He attended University of Illinois and NYU Tisch School of the Arts. He has recently moved to Los Angeles.

About “We All Die Alone”: An eight-way standoff between two warring gangs unexpectedly leads to romance.

Watch the NFMLA interview with Jonathan Hammond director of “ We All Die Alone”:

“Inside the Beauty Bubble,” directed by Cheri Gaulke and Cheryl Bookout

About Cheri: Cheri is a pioneer in the feminist art movement in Los Angeles. Her work has been presented in film festivals internationally, in museums and in a Smithsonian touring exhibition. Recent films include “Gloria’s Call” (2018) about women and Surrealism, winner of Best Documentary at the Ann Arbor Film Festival; and the award-winning “Miss Alma Thomas: A Life in Color” (2021) about an under-recognized African-American painter, featuring the voice of Alfre Woodard. She is currently in production on her first feature documentary, Acting Like Women, about feminist performance art in 1970s-’80s Los Angeles, an under-represented movement that profoundly shaped art and social movements of today.

About Cheryl: Cheryl Bookout is a filmmaker and studio artist residing in Joshua Tree, California. She directed the short documentary film “Inside the Beauty Bubble” and produced the award-winning short documentary “Gloria’s Call” (2018). Bookout also produced the short sci-fi film “Pure” (2019) and is currently producing a feature-length documentary, Acting Like Women, and a short narrative film titled “Just a Friend.” She is in pre-production for a proof of concept for her award-winning sci-fi episodic screenplay, Women of Steel. Cheryl is the executive director and founder of The Chimaera Project, a nonprofit championing women and non-binary filmmakers, and has been a guest on numerous filmmaking/art panels throughout the U.S.

About “Inside the Beauty Bubble,”: A year in the life of Jeff and his Joshua Tree roadside attraction as they face a year of lockdowns, protests and massive societal change.

Watch the NFMLA interview with Cheri Gaulke, star of “Inside the Beauty Bubble”:

“Shadow Self,” directed by Jesse Randall

About Jesse: Jesse Randall is a writer, director, & producer based in Los Angeles. His work primarily focuses on creating LGBTQIA+ content through his company, JR Vision Films. His digital series The Safety Plan, along with his short film collection, was acquired by Revry TV this year. Revry TV is the world’s first global LGBTQIA+ streaming platform. The Safety Plan was nominated for “Best New Media” at the 2021 NFMLA Awards. He is also actively involved in local activism pertaining to the homeless epidemic and Black Lives Matter.

About “Shadow Self”: During the global pandemic lockdown, a self-destructive party girl finds herself trapped alone in her apartment with her greatest enemy: herself.

Watch the NFMLA interview with Jesse Randall, director of “Shadow Self”: