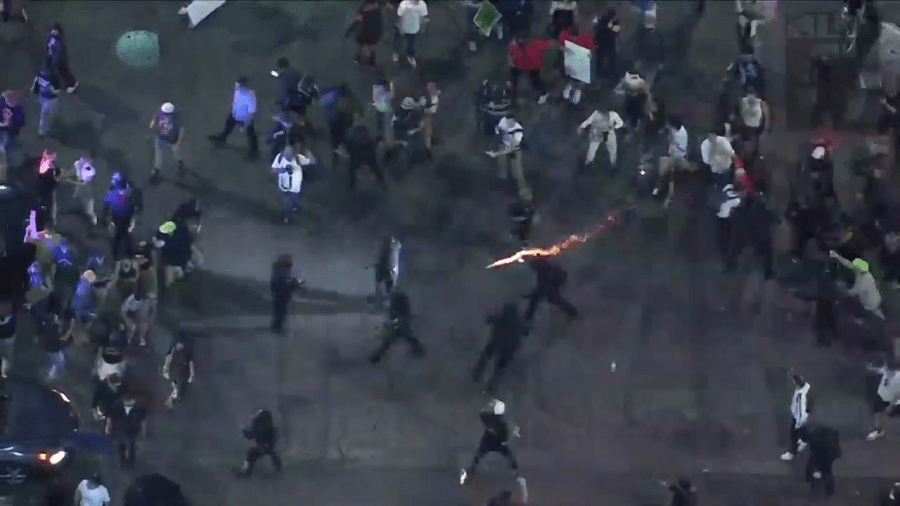 (KTLA) – A man who allegedly attacked a police officer with a “makeshift flamethrower” during Friday night’s abortion rights demonstration in downtown Los Angeles has been arrested and is facing possible charges for attempted murder.

The Los Angeles Police Department said 30-year-old Michael Ortiz attacked an officer with a torch, sending the officer to the hospital with burn injuries.

While most demonstrations were peaceful, a sentiment echoed by both organizers and the LAPD, a small group of protesters did clash with police in downtown. Bottles, rocks and fireworks were seen thrown at officers during a later portion of the protest.

Ortiz was booked into jail where he awaits charges for attempted murder of a police officer, LAPD said. He remains in custody as of Saturday night with bail set at $1 million, according to the Los Angeles County Sheriff’s Department inmate roster.

LAPD Chief Michel Moore said that, although he supports protesters exercising their First Amendment rights, those who commit crime will be arrested and the department will “vigorously pursue prosecution.”

“I condemn the violence against officers that occurred last night and into today. Individuals participating in such criminal activity are not exercising their 1st Amendment rights in protest of the Supreme Court decision, rather, they are acting as criminals,” Moore said in a news release.

A second person, whom police identified as 23-year-old Juliana Bernado, was arrested after she allegedly tried to take an officer’s baton. Bernado was struck by a 40mm “less lethal round” which helped police take her into custody. She was booked into jail and faces possible charges for resisting arrest, police said.