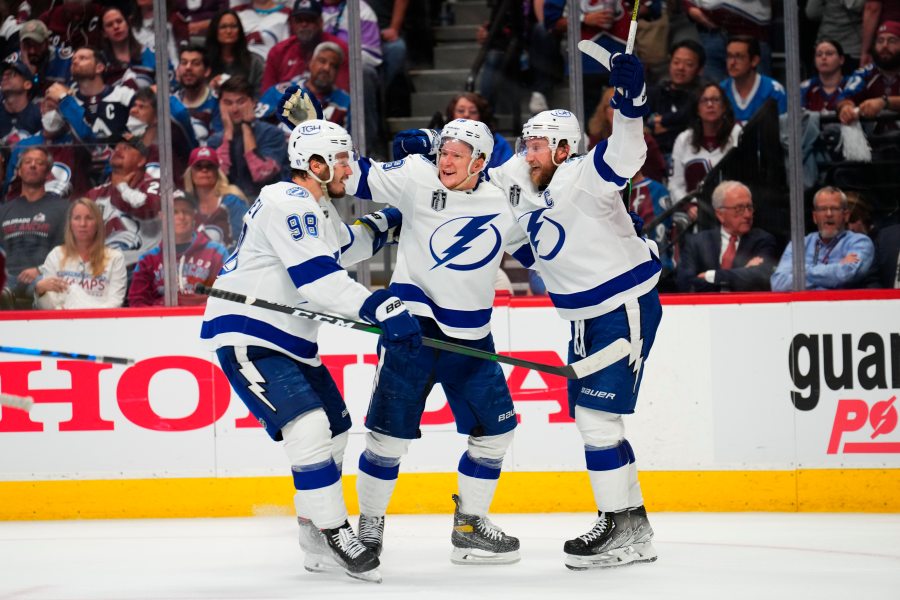 TAMPA BAY, Fl. (AP) – The Tampa Bay Lightning prevented the Colorado Avalanche from hoisting the Stanley Cup in Denver with a spirited effort in Game 5.

The two-time defending champions will look to take another step toward keeping the cherished chalice in their case on Sunday night when they host the Avalanche in Game 6 in Tampa.

Ondrej Palat scored the go-ahead goal with 6:22 remaining in the third period to lift the Lightning to a 3-2 victory over the Avalanche on Friday. Palat’s 12 career game-winning goals in the playoffs trail only Joe Pavelski (14) and Evgeni Malkin (13) for the most among active players.

Tampa Bay, which survived an elimination game for the third time this postseason, still trails 3-2 in the best-of-seven series. The Lightning is bidding to join the 1942 Toronto Maple Leafs as the lone NHL teams to successfully rally from a 3-1 series deficit to win a best-of-seven Stanley Cup Final. Those Leafs actually came back from a 3-0 series deficit.

“We extend the season and that’s what we wanted to do,” Lightning captain Steven Stamkos said. “We talked about one game at a time. It was a grind, but we found a way. Great effort and now we’ve got to do it again.”

Pat Maroon is aware of that. After all, the 34-year-old Lightning forward knows a thing or two about winning the Stanley Cup after doing so in each of the past three seasons.

“Listen, this is a huge challenge for us,” Maroon said. “An exciting challenge, too. You’ve got to be excited for this challenge and embrace it.”

Tampa Bay has an impressive 8-2 record at home in the playoffs with an average of 3.70 goals scored per game. The Lightning return to Amalie Arena for the first time since dropping a 3-2 decision in overtime on Wednesday.

Colorado, in turn, has won the first three series on the road and is a sizzling 8-1 away from home in the postseason. The high-octane Avalanche has averaged a robust 4.56 goals and 44.0 percent power-play efficiency on the road.

Colorado captain Gabriel Landeskog, like Stamkos, publicly said he wants his team to focus on Game 6 — rather than dwell on the events of Game 5.

“So, it is what it is. Short memory in the playoffs, and that’s what we’re going to do.”

Colorado defenseman Cale Makar collected a goal and an assist for his eighth multi-point performance of the playoffs. The Norris Trophy recipient trails only Hockey Hall of Famers Al MacInnis (10, 1989), Brian Leetch (nine, 1994) and Paul Coffey (nine, 1985) for the most by an NHL defenseman in a single playoff year.

Avs forward Valeri Nichushkin also had a goal and an assist Friday for his fourth multi-point performance in his past seven games.