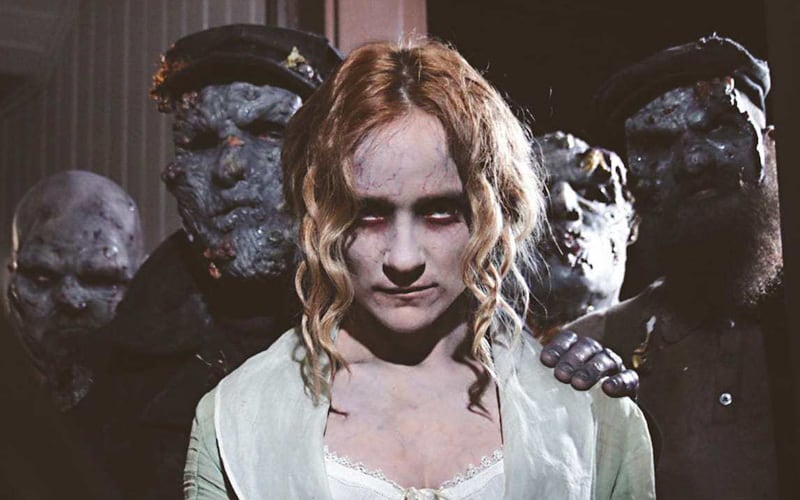 Plot:
A young man awakens alone on a remote beach, marooned there by a violent storm. Above the rocky crags, a lighthouse stands like a sentinel. The man seeks the help of Walsh, the enigmatic lighthouse keeper, who insists they are the sole inhabitants of the peninsula. However, the young man is haunted by fleeting glimpses of a beautiful young woman, and plagued by visions of hideous phantoms reaching out from the depths…

Reviews:
“This film certainly gave eternal rest to “the good and the bad and the worst and the best” parts of Poe and his brilliant madness, but it also somewhat spoke to the quality of certain elements of the movie as well; which is why CrypticRock gives Edgar Allan Poe’s Lighthouse Keeper 3 out of 5 stars.” Cryptic Rock

“A curiously arcane choice for today’s market, this is clearly a film made for love. It’s doomed to fall short of its creators’ ambitions but it has a pleasing sincerity and enough substance to entertain even those unfamiliar with Poe’s work. Enjoy it with a fine amontillado on a night when the wind is high.” Eye for Film

“Working with a tiny budget, the movie probably falls short of its creators’ ultimate vision, but it should please fans of Poe, touching upon his themes of guilt, dread, isolation, and paranoia. On the whole, Cooper and Edge have been able to offer a narrative that fits with Poe’s unfinished story and captures the spirit of the author’s earlier work.” Horror DNA

“The acting ranges from fair to good. The cinematography is just right for the story, but some of the camera work feels very Indie, but not completely amateurish. Some of the camera cuts between scenes feel too quick and off-putting, but the film at time seems to be nightmarish, so perhaps this plays into a disorientation factor.” Monkeys Fighting Robots

“The film is on the slow side but Cooper produces a passable atmosphere and even occasionally spooky moments. On the minus side, the film is low budget. You have to commend that it does produce a period atmosphere quite well within these limitations. On the other hand, the digital effects of the ship about to crash on the rocks are painful.” Moria

“O’Neill and Riley give respectable performances portraying a downward spiral into madness while Wells seemingly embodies the dark and solemn persona of the classic writer himself. With a well-developed plot, a layered story and a twist that brings everything full circle, Edgar Allan Poe’s Lighthouse Keeper is a great reflection of the legendary writer’s final days.” Pop Horror

“The casting of both O’Neill and Wells is incredibly on-point, with a delicious grating of personalities between the former’s skittish nervousness and rat-tat-tat delivery of dialogue, to the laconic doom-mongering of the latter. As with most genre movies with a thinly-spread kitty, there’s a call for patience as the narrative gathers pace, but come the final third there’s a marked shift in tone which should satisfy all horror hounds.” The Schlock Pit

Release:
ITN Distribution released the film in 2017 on DVD and Digital. Meanwhile, a UK DVD release via New Horizon is available from 9 January.

THE LIGHTHOUSE (2016) Reviews and overview

THE LIGHTHOUSE (2019) Reviews and overview