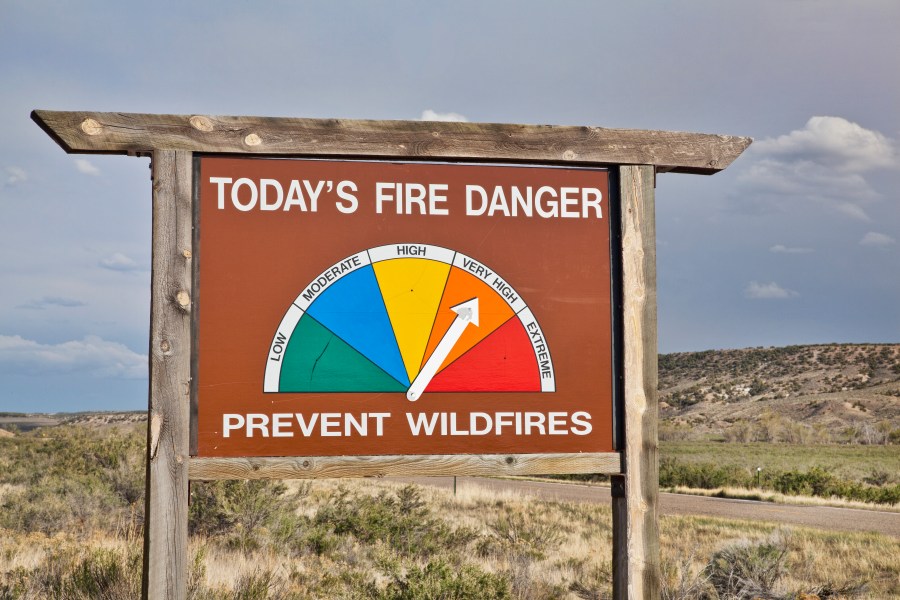 State officials are forecasting a higher than average fire season in 2022, with extreme drought conditions along the Front Range heading into July.

At South Metro Fire Rescue Station 39, the fire danger dial out front sits at “Very High,” unusual for this time of year.

“Right away driving down the street you can see it’s normally green, and it’s just not,” says Captain Brian Delasantos. “The fact that we haven’t had significant moisture in a month, is drying out the fuels.”

Delasantos said the ponderosa pines, and the other trees that cover the district, are dry as well.

“Right now, we’re seeing fuel moistures in these trees that we wouldn’t normally see until July or August, and it’s April,” he said. “So it’s kind of mind-blowing in a way.”

It is, however, a proactive safety measure they’re not used to using in April.

Delasantos said if dry conditions continue, his team could be in for a long summer.

He’s concerned small fires in pockets behind subdivisions could cause more damage than usual.

Colorado man dies after setting himself on fire near Supreme Court

“Those are all going to be explosive, and potentially carry fire into homes,” he said. “You don’t have to burn more than 10 acres, but that could be an explosive 10-acre fire that takes out 3 or 4 homes, and that’s what really concerning about this type of fuel and weather pattern we’re in right now.”

Delansatos told FOX31 it’s important for Coloradans to understand the risk this spring, summer, and fall, and to be prepared no matter where they live.

“Man, cross your fingers we get some moisture for May,” he said. “It should have been here already, but hopefully it’ll happen.”

According to him, a wet May could at least delay some of the concerns.