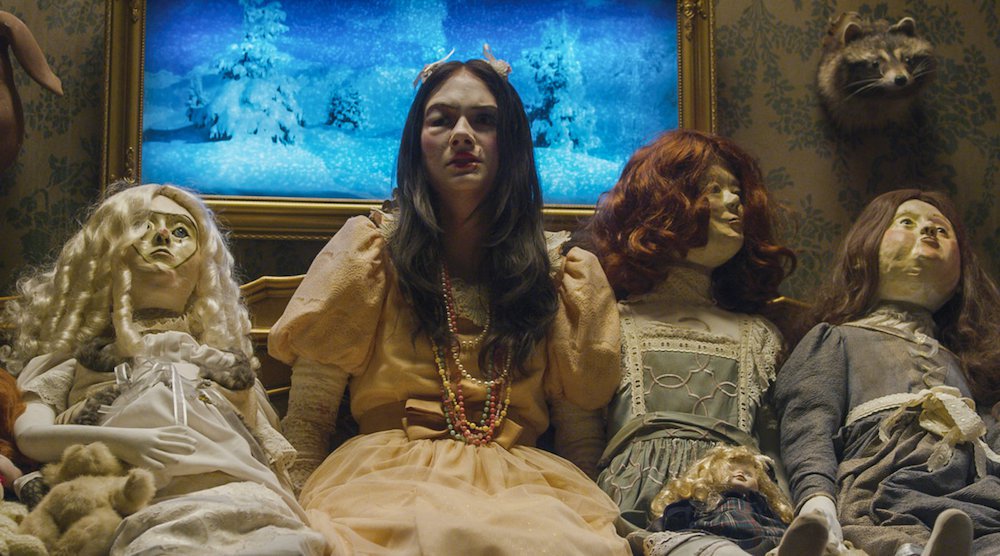 Incident in a Ghostland is a 2018 French/Canadian horror film written and directed by Pascal Laugier (The Tall Man; Martyrs). Also known as Ghostland

Plot:
A mother of two inherits a home from her aunt. On the first night in the new home, she is confronted with murderous intruders and fights for her daughters’ lives.

When the girls suffer this terrible childhood trauma, their disparate personalities diverge even further. One becomes a famous horror author, with a perfect family and life in Los Angeles, while the other can’t cope, and loses her mind.

Sixteen years later, the daughters reunite at the house, and that’s when things get strange…

Reviews:
“While the sum never quite equals its individual parts, there’s no shortage of Laugier’s trademark penchant for making one squirm, writhe and fidget in their seat. Alas, the movie tone-deafly functions best in its visceral depictions of vilely misogynistic sadism.” Arrow in the Head

“With his latest, Laugier proves that he can still shoot a film that looks good and can make the audience squirm. How he provokes this reaction and the film’s airy story, however, detract greatly from Ghostland and its overall quality.” Bloody Disgusting

“What’s so intriguing about Incident in a Ghost Land is that, just as the action gets rolling and you begin to lose yourself to the intensity of the situation, the story does a flip onto its head and everything spins 180-degrees. You cannot say that for many films these days, let alone, those in the Horror genre. While this film is full of spins that will keep you grasping, it is ultimately a truly disturbing experience.” Cryptic Rock

“Unusual antagonists and atypical storytelling remain weird enough to take the edge off of how nihilistic the horror can be. Although occasionally ugly, Incident in a Ghostland’s mysterious mannerisms are intriguingly terrifying. Provided some simplicity and plentiful pugilism can be stomached, Ghostland’s gruesome grittiness can satisfy almost any appetite for nightmarishly frightful chills.” Culture Crypt

“Rarely does a running time so short feel this emotionally exhausting, which is all down to the Laugier’s masterful knack for cranking up the tension at all times while pulling in ever-closer to the trauma on display. It may have its troubles, and it will surely leave you terrified, but mostly this is just terrific filmmaking.” Den of Geek!

“There is no subtlety to Incidents in a Ghostland, not in any of its facets. The jump scares have cliché string stabs, unrealistically creepy dolls litter the screen, and what lights are present all seem to rely on 30w bulbs. The violence is almost solely that of a brick sh*thouse of a man slapping these two young women around being a creep who lifts up the skirts of dolls to sniff their crotches because… gross.” Dread Central

“Incident in a GhostLand plays house with mentally unstable maniacs only to achieve the bluntest misunderstanding of “horror” I’d challenge to be dethroned this year. Pain for the sake of watching something bleed. Even in horror terms, “ill-advised” is the one phrase that keeps coming to mind.” Flickering Myth

“Pascal Laugier’s Martys and The Tall Man are both excellent, but with this he’s running the risk of becoming the M. Night Shyamalan of torture p*rn. Plenty of horrible violence with the hysteria level frequently turned up to eleven, Incident does boast at least one marvellous and creative scene of a girl posed in amongst a bizarre collection of dolls.” House of Mortal Cinema

“For some horror fans, such “extreme” content in a relatively upscale package made Martyrs special, and they may enjoy a similar frisson here. The rest of us will again feel a tad queasy about the way Laugnier meticulously showcases sadism while seeming comparatively indifferent to matters of basic storytelling logic and suspense.” Variety

THE TALL MAN (2012) Reviews and overview