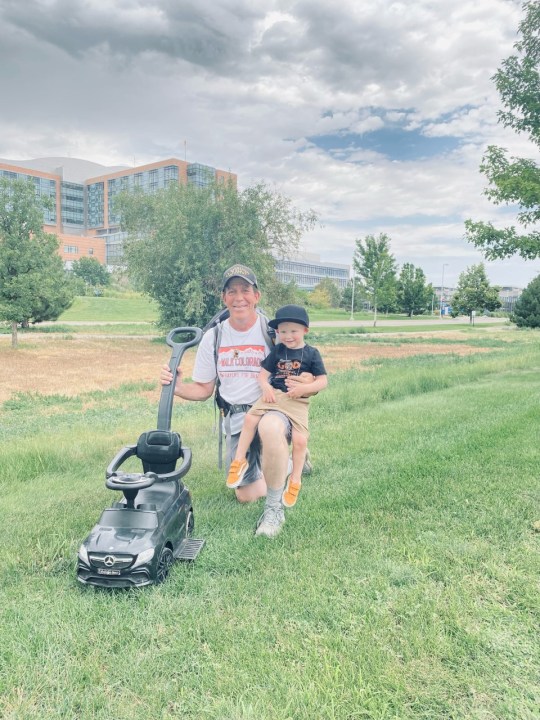 DENVER (KDVR) – A walk made in honor of a 2-year-old boy who has cancer started in Colorado Springs back on July 16 and ended at the Children’s Hospital in Aurora on Saturday, all while raising money for the families of children facing a similar struggle.

The walk for childhood cancer awareness was made for a little boy from Colorado Springs named Braxton Hankins, who was diagnosed with B-cell acute lymphoblastic leukemia with a genetic marker called iampi-21 just over a year ago.

The person who completed this long walk in Braxton’s honor is Jim Hickey, who is a 60-year-old Marine veteran who began walking for people with cancer after he watched his father take his last breath after battling cancer. He was joined on portions of the walk by Braxton.

Now, Braxton’s family is asking for the public’s help.

“Our number one thing is just donating blood and platelets, because it’s just life-saving, not only to Braxton but thousands of other kids that are going through it and being treated at Children’s,” Braxton’s mother, Britney Hankins, said.

In addition to donating to the GoFundMe created in Braxton’s name, you can also answer Britney’s request by signing up for a blood platelet donation appointment at Children’s Hospital in Aurora’s blood donation page.

“As devastated as we were to hear our baby boy had cancer, we have been blessed with the most amazing care team at Children’s, met life-long friends, we’re constantly learning and have built a family that is unshakable,” writer of the GoFundMe page said.

So far they’ve raised $3,000 of their $15,000 goal. They do not know exactly how they plan to use it to help families, but one idea they are mulling over is an idea inspired by Britney’s grandfather.

“I am thinking about buying a car hauler-type trailer and offering a place at Children’s Hospital for parents to come and receive prayer, sit in silence or just have a listening ear,” the GoFundMe page said. “I got this idea from my grandpa who used to minister to bikers out of a trailer he called his church crossroads ministry ‘a church without walls.'”

Now, the next big moment for Braxton is his third birthday which will be on Aug. 24.