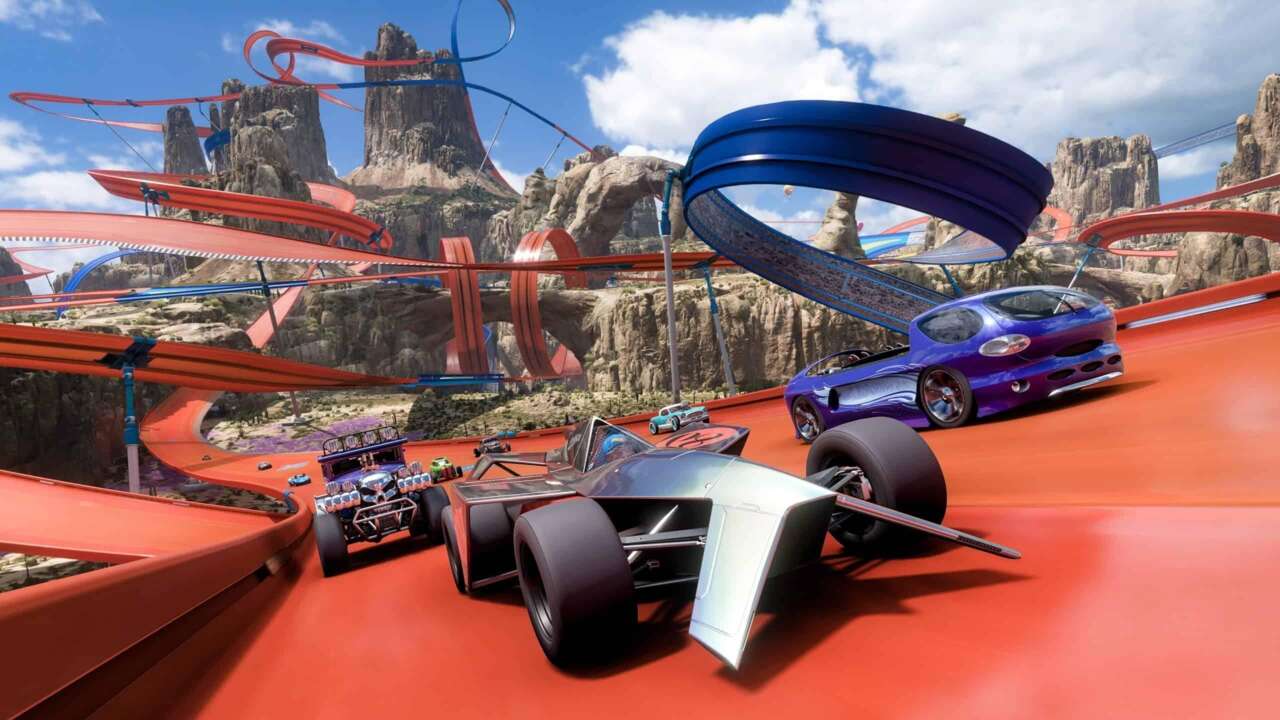 The Forza Horizon series has already crossed over with numerous franchises, from the building blocks of Lego to the family in Fast and The Furious, but it’s the one with Hot Wheels and Forza Horizon 3 that sticks out the most when looking back. The combination of Horizon’s blisteringly fast cars and the creativity of Hot Wheels twisty tracks was an unsurprising hit, making its return in Forza Horizon 5 an anticipated one. It’s an expansion that manages to deliver the same thrill as before, with new track types and a much larger map, but also a structure to progression hampers the pacing.

The orange highways of this new expansion are strewn across the sky over Mexico, creating a racing paradise nestled in the clouds just waiting to be torn through. The map is larger than the one previously offered in Forza Horizon 3, featuring three biomes that introduce different weather conditions depending on where you are. They’re also a big reason why this new playground is immediately engrossing–the introduction into the map has you speeding through each part of it while taking in its best sights, from dropping down almost vertically into an active volcano inside a snowy mountain, to sliding down water-laden chutes in a thick jungle. The recognizable Hot Wheels track pieces that let you navigate these areas are beautifully contrasted against the natural beauty around them, making the entire space feel like a daydream come to life.

The plastic pieces of the raceway are also more varied this time around, which does accentuate the playful nature of the entire expansion. Magnetic strips suck you down onto the track, letting you complete parts of a race upside-down or creating intricate loops where maintaining speed is paramount. Others are laden with thick layers of ice, making navigating even some of the widest corners a satisfying challenge as you struggle to maintain grip. The most exhilarating are stretches of road with giant overhead fans, each of which boost your speed to new heights not possible to reach in the main portion of Forza Horizon 5. It’s a thrill to be flung around corners at these ridiculous speeds, feeling like you’re barely hanging on when braving them with some of the fastest cars in the game.

Your progression through this new map is dictated by a stricter format than you might expect from the Horizon series, which usually lets you achieve anything you want in any direction. Here, you’re initially limited to B-class cars and must work your way towards increasing your rank to access faster ones. You increase your rank by collecting medals, which are awarded for participating in races, sprints, and smaller contextual events such as speed traps, drift zones, and popping floating balloons around the map. Several missions also lump many of these activities together, rewarding you with more medals for completing a collection of races or completing small challenges around the map with your current class of cars.

The structure makes sense in the context of slowly introducing you to faster and faster cars as you come to grips with the new challenges that this expansion offers, but it does alter the pace to one that feels more like you’re checking things off a list rather than progressing through doing the types of activities you enjoy. This is especially true when considering how few events there are at each new driving rank that you unlock, with you needing to do almost everything in order to progress and unlock new events. I loved doing races and cinematic showcase events, but I wasn’t as thrilled with the downtime I was forced to take while hunting down speed traps in order to unlock more of what I wanted.

Tossed in with the standard racing events is a new five-part story-driven series that acts as a deep dive into the Hot Wheels franchise while taking some of its most iconic vehicles (10 of which are included in the expansion) out for a spin. This series mimics the structure of the one centered around the Volkswagen Beetle in the main campaign of Forza Horizon 5, starting at the origin of Hot Wheels and charting its meteoric rise over the years as the series went from a simple children’s toy to prized collectible car series. While the information is certainly interesting if you’re unfamiliar with it, the delivery comes off as less sincere and more advertorial in quite a few spots. It was easier to view the VW Beetle through the lens of its history in Mexican car culture than it is to listen to a ramble of factoids delivered by a character who proudly exclaims to have memorized it all by the age of six, which makes the entire series quite uneven.

Thankfully, most of the joy you’re likely to squeeze out of this return to Hot Wheels is in the high-octane racing taking place in the skies, and it’s during these moments where it’s a bit easier to forget about its unfortunate shortcomings. The expanded map and diverse geographic makeup is a joy to explore, as is coming to grips with all the new pieces of plastic track surfaces that keep otherwise routine races from turning stale. It’s disappointing that this energy couldn’t be entirely converted over to the expansion’s love letter to the Hot Wheels franchise, and it’s annoying to be routinely reminded of all the other types of events you need to complete in order to unlock some of the best new vehicles, but it’s still a detour worth taking if you’ve been itching for another fix of Forza Horizon fun.