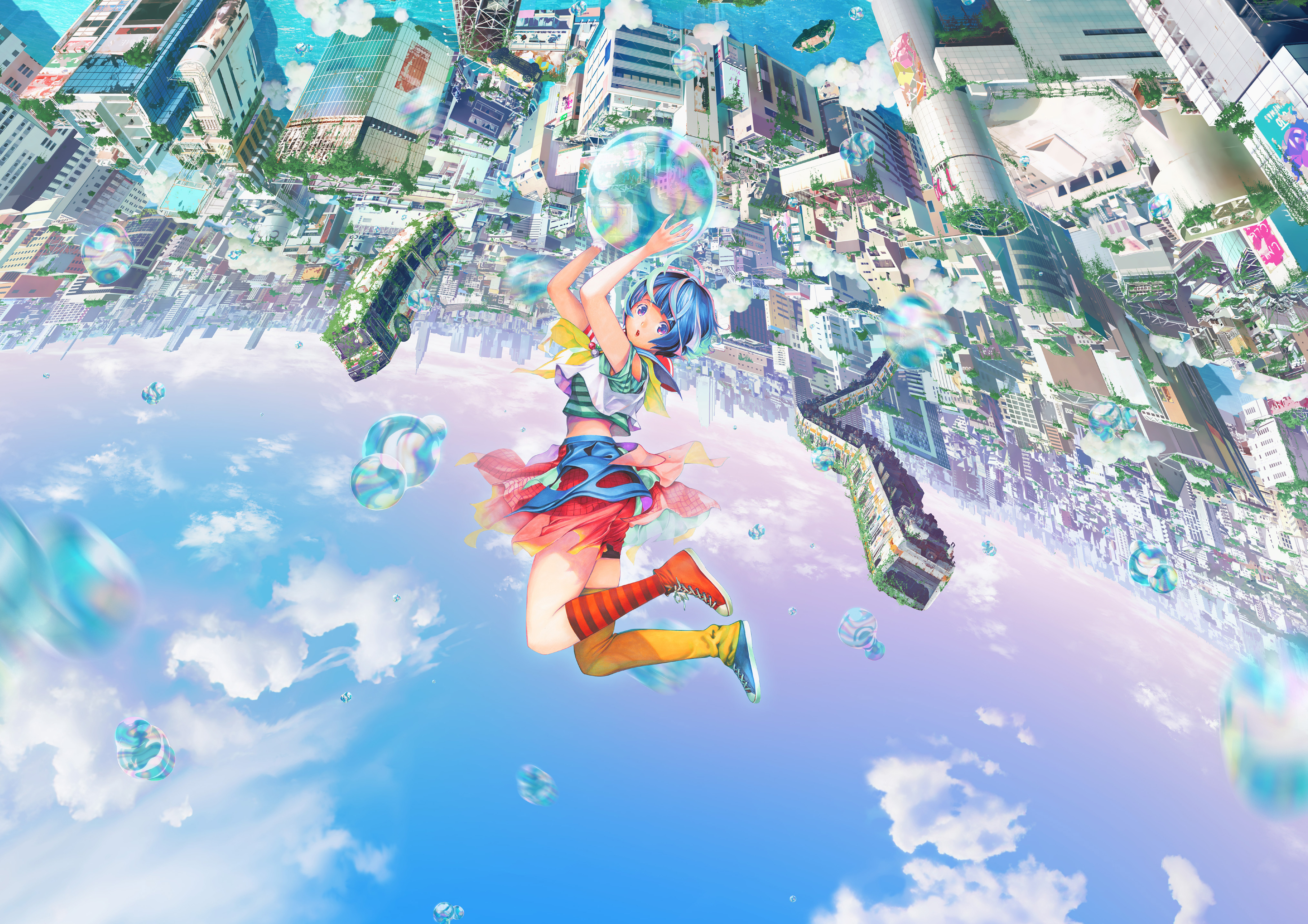 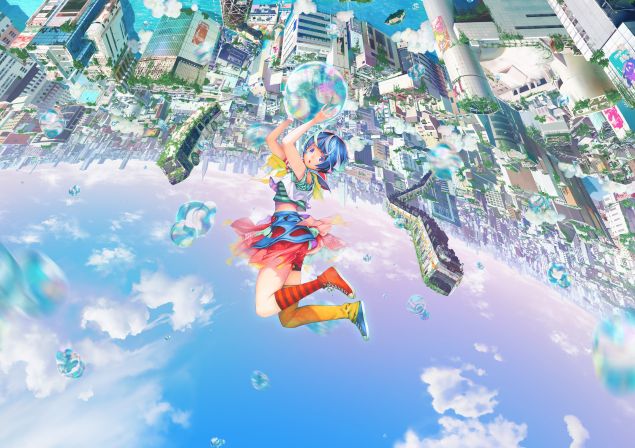 I didn’t think I’d experience boredom while watching a film about a team of acrobatic teenagers who compete in life-threatening parkour competitions, all set in a gorgeous yet dystopian version of Tokyo no less. Adding to my disappointment and confusion was that the film in question is the latest project from Wit Studio—an anime production house with a remarkably strong track record in recent years (Vinland Saga, Ranking of Kings)—and its creative team includes Tetsuro Araki, one of the most influential anime directors of the last 15 years, and Gen Urobuchi, one of the medium’s most distinct and engaging voices. But not even the remarkable animators at Wit could save Netflix’s dull and insipid Bubble (not to be confused with Judd Apathow’s tepid pandemic comedy The Bubble).

A post-apocalyptic take on The Little Mermaid, Bubble is set five years after an unexplained phenomenon which caused bubbles to fall from the sky. The bubbles appeared worldwide, but an explosion in Tokyo Tower left the city encapsulated in one giant bubble, and the bubbles that continued to fall flooded the city and screwed with its gravity. Tokyo’s main inhabitants are now groups of orphans who compete in parkour tournaments called “Tokyo Battlekour” where teams of five race against one another for daily essentials. Hibiki, an introvert who keeps a pair of stylish headphones on at all times because of his hypersensitive hearing, stands out as the only competitor who can land on the bubbles without popping them, thus using them to his advantage in matches.

One evening Hibiki hears a song coming from Tokyo Tower and climbs up seeking the source.  When he falls into Tokyo’s flooded waters and ends up trapped in a submerged train car his salvation comes in the form of a bubble who evolves into Uta, a quirky, cat-like girl who may open up a path to reveal the mystery behind the bubble phenomenon and bring Tokyo back into the world.

Things threaten to get interesting when Hibiki’s team faces off against their main Battlekour rivals Undertaker (sadly not a reference to the recently retired WWE star), who have Swat-esque outfits and cyclop face masks. Undertaker also have hydraulic boots, so they seem to pose a threat. But they’re quickly vanquished and revert to characters who exist only to assist Hibiki in saving the day.

The duel between Hibiki’s squad and Undertaker is the film’s high point. Bubble’s parkour scenes (of which there are plenty) are wonderful blends of 2D character animation with 3D backgrounds, and provide the momentum, pizzazz, and energy the tired story lacks. The animation work by Wit here is as strong as it could get and the character designs by Takeshi Obata (Death Note) are extremely appealing. The visual talent presented is undeniable, but it is all let down by the script delivered by Urobuchi, Naoko Sato, and Renji Ōki. Granted, Sato and Ōki dont have much experience writing anime, but from Urobuchi, whose credits include Madoka Magica and Psycho-Pass, I expect better.

In a promotional video released earlier this month, Araki says that the project began when he approached producer Genki Kawamura saying that for his first original film, he wanted to work with someone who knew how to reach a wider audience. That’s odd given that Araki directed  Death Note and the first three seasons of Attack on Titan, two of the biggest anime hits of the 21st Century. And does Araki need help reaching a wider audience when the two biggest theatrical anime films in recent years, Demon Slayer: Mugen Train and Jujutsu Kaisen: Zero, are action-heavy films based on incredibly popular series, the kind of series he specializes in directing.

A sports anime focused around a group of orphans which makes the conscious decision to compete over basic necessities instead of participating in everyday society is the seed of a fruitful idea. But instead of playing to his strengths Araki has settled for lowest common denominator storytelling. The only advice I can offer anime fans who may be interested in seeing the latest from Wit Studio is to wait for the parkour scenes to appear on a YouTube compilation video. I can’t promise you the EDM or hyperpop track the user will upload will fit your taste, but at least you won’t be bored.

Observer Reviews are regular assessments of new and noteworthy cinema. 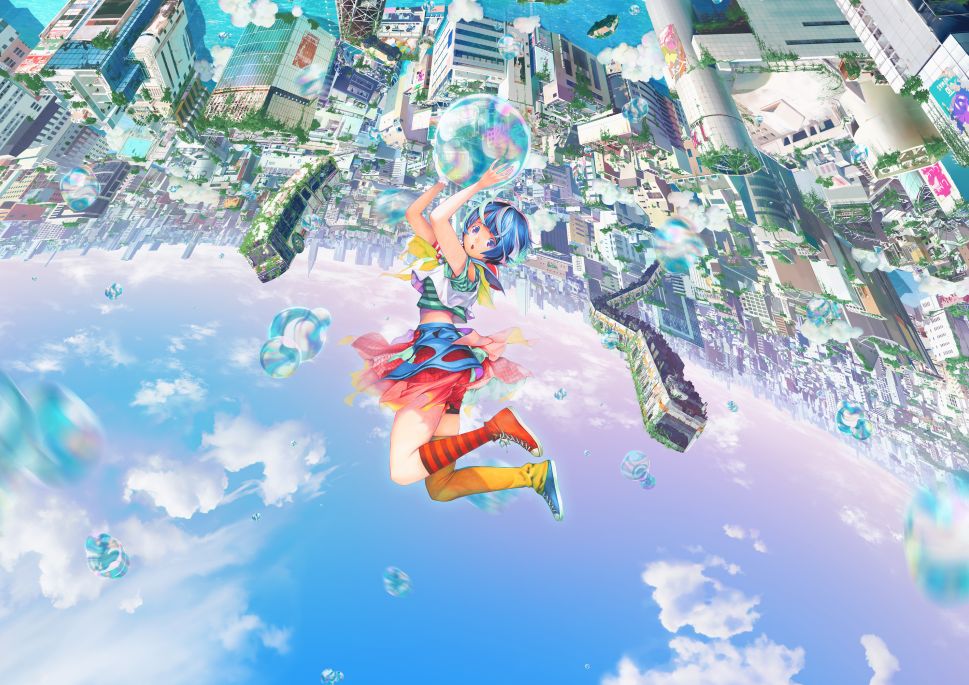