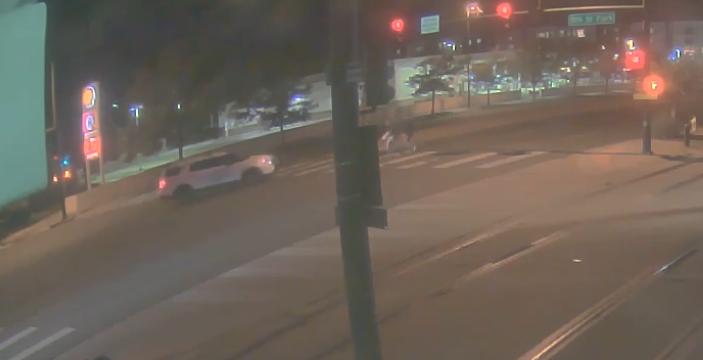 DENVER (KDVR) — It was the last person Eric Szakmary ever thought would hit him in the middle of a crosswalk where he had the right of way.

“You’d think if anybody was paying attention to their surroundings, it would be an officer,” said Szakmary, remembering the night of Sep. 17, 2019, when he was hit by a Denver Police Department officer in a patrol car at the corner of West Colfax Avenue and Mariposa Street.

Surveillance from a nearby RTD camera clearly showed Szakmary and the friend he was walking with waiting for the walk signal before they crossed the intersection — only for Szakmary to be hit by a patrol car driven by Officer Jamie Taft.

Body camera video obtained by the Problem Solvers captured Szakmary’s first reaction as Taft approached him: “You’re the last person I would expect to get hit by!”

Taft responded, “I apologize. Like I have a…I’m so sorry. I have a bike in the back of my car. And it moved, and I thought it was breaking the door, so I apologize. I’m so sorry.”

When paramedics arrived, Taft told them the same story, as captured by her body camera: “I have a bike in the back of my car, and it moved, and I thought it was breaking glass, so I looked back, didn’t even see him.”

But Taft’s own body camera revealed she was actually on her phone, typing something, when she hit Szakmary.

Taft received a 38-day suspension, and her department discipline letter confirmed she pleaded guilty to careless driving on Jan. 27, 2020. The letter stated, “The city has significant financial exposure arising from any claim which could be filed.”

“Liability on the case seems very, very clear. And yet the City and County of Denver and the officer that hit my client refuse to accept responsibility for it,” said attorney Scott Smith, who filed a lawsuit on behalf of Szakmary in September 2022.

Smith said there’s no reason for the city not to settle quickly, especially because Colorado’s government immunity cap means the most Denver would have to pay out is $387,000.

“And his (Szakmary) medical bills are almost equal to the cap,” Smith said.

The 54-year-old suffered multiple spine fractures and underwent surgeries on his hip and knee.

“They’re saying don’t text and drive, and then one of their own texts and drives. And not only that but causes grievous injury to a helpless person just crossing the street. I was just trying to get across the street,” Szakmary said.

In the body camera video, Taft can be heard saying at one point, “I just feel like the most gigantic a–hole. I just didn’t see him.”

A spokeswoman for the Denver City Attorney’s Office told the Problem Solvers the city won’t comment on pending litigation. An attorney for Taft did not respond to a FOX31 request for comment.