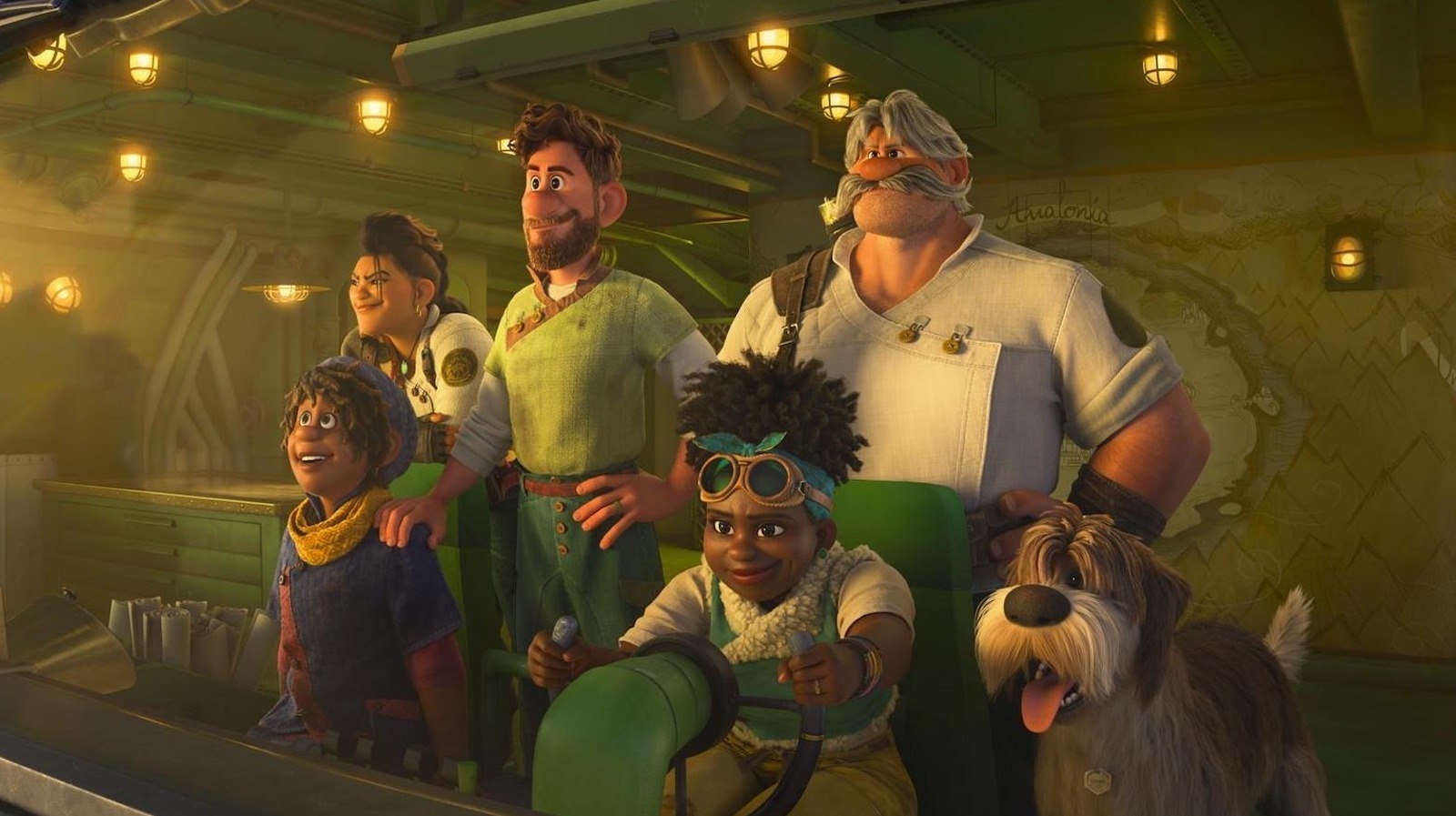 You mentioned James Horner and John Williams. Composers such as them, and John Barry and Jerry Goldsmith, have created this expectation for adventure, musically. When you’re creating music in this genre, are there rules or elements you have to deliver?

I hesitate to say there are rules, but there’s no denying with such titan composers like John Williams and the late James Horner, perhaps not rules, but a heritage to respect is what gets created. And it’s a combination. There are a few ways you want to push things into the future, but you would be arrogant and misguided to ignore the heritage from adventure films handed to us. I know it’s more like a superhero thing. I kind of got to do it, funnily enough, in the end credits of “Strange World.” There’s this big piece of real estate, it’s about two and a half minutes, three minutes long where it shows up on the soundtrack. I think it’s like the second to last track. It’s just called the “End Credit Suite,” where it’s just every theme in the movie in a swashbuckling, three minute suite.

I’ve always thought that the intro to “Superman,” the first thing that happens is you just get a load of swooping credits for about three and a half minutes while John Williams gets to blast through every single tune of “Superman.” It’s like, we haven’t even started yet and we get a full operatic overture. I guess that’s kind of what I’m talking about in terms of Don and Qui. Gone are the days where a film composer gets a three and a half minute piece of real estate before anything’s even happened to blast through a staggeringly well-orchestrated series of incredibly effective themes.

Now, I didn’t get to do that at the beginning, and I’m certainly not as good as John Williams, but at least I got to do my overture in the end credit titles where you get every theme in the movie in a sort of medley that would be the kind of thing you might do, like the concert hall version. If someone said, “Hey, have you got a medley of all the ‘Strange World’ themes?” Yeah, it shows up in the end and credits.

I know that’s not necessarily a great example because it’s more like a superhero movie, but I guess going back to your question about rules — maybe not rules, but in this heritage of adventure music, firstly there’s incredibly committed thematic material. There’s no attempt to sort of be endlessly minimalistic.

If you think of Indiana Jones or “Jurassic Park,” they are giant themes unashamed of their narrative invasiveness. You’re not supposed to be hiding in the corner. When Sam Neill finally gets his head turned around by Laura Dern, it’s not pulsing away with a drone. And it’s turned way up. There’s no hiding. It’s like, here we are. This is the time-honored classical use of score, where the narrative power of score is being absolutely maximized.

I guess along with that tradition is, given that there are all kinds of ways you can use an orchestra, some of which are pioneering in their sort of modernity, Hans [Zimmer] being a good example. The way Hans uses an orchestra in something like “The Dark Knight” is almost a Philip Glass-y, Steve Reich-y re-imagination, which is fantastic in its own right. I guess for the kind of thing we’re talking about, it’s more the full, for want of better words, classical use of a symphony orchestra in all of its coloristic variation.

I guess the other thing about adventurous music is that a lot of contemporary film music harmonically might be like a bit more pop, “Strange World” has quite a lot of otherly, more 20th century concert music harmony to produce that slightly Dagobah system. The whole sort of, “What’s going on here?” strange and otherworldly harmonies that are much closer to concert music. It’s nice to be able to deploy, not for pretentious academic reasons.

My go-to example that I just absolutely love — it reminds me of a great Italian composer I’m really keen on, probably quite underrated composer, [Ottorino] Respighi — is “Empire Strikes Back.” It has the ultimate version of what I call harmonic dissolve, meaning at the beginning of the movie, you get through [the opening crawl] and you feel safe with those themes. It’s in a harmonic context, it’s diatonic, it’s rousing, it’s heroic. Then you get, “Oh wow, what happened there?” And just as the credits finished rolling and the text is finished and the big ship comes out, suddenly the harmony dissolves into some seriously complicated atonal harmony. It all starts sounding like Stravinsky. The little podule comes out, goes into the Dagobah system.

Never has there been such a good job where you don’t need any talking. The music is giving you that, “The story begins.” Such is his craft and talent that the podule coming out of this Imperial ship, rather than feeling in any way mechanical, it’s almost mythic. This investigative probe is coming out and going onto the planet, and the way the harmony completely dissolves in this incredibly highbrow piece of music that quite frankly, you could put up against Stravinsky and you’d go, “Is it Stravinsky? Well no, it happens to be John Williams, but it’s basically as good.”

It dashes the hope from “A New Hope” and gives you the dread of “Empire Strikes Back.”

Yeah, exactly. It feels a bit like jumping out of a plane and going, “Oh, there’s nothing under my feet,” because the harmony is so unsafe. In my own much more humble way, “Strange World,” on the soundtrack there’s a piece called “Strange World Overture,” which is this piece that I just wrote completely away from picture to try to evoke the underlying thematic DNA for this other world. It’s got quite a few unusual harmonies.

Talking of rules, there is a certain heritage for mysterious scenes and mysterious music. I’m thinking of other John Williams examples, so if you think of a cue like, for example, when Luke Skywalker goes into that Dagobah cave and has that semi-mystical experience of seeing his own face in this sort of surrealistic scene, if you check out what’s going on in the harmony and orchestration, it’s just off the scale in terms of being a million miles away from safe, diatonic chords.

Even a movie like “Jaws,” you know when they’re telling all those stories? There’s some cue in “Jaws” I’ve always found heavily influential, a lot of string harmonics in it. But the real key to it is that the harmony is so unsettling. Of course, as an audience, you shouldn’t really be thinking about it, but what it does is it just puts this exoskeleton over the movie without you realizing it, just tilting you a long way from feeling home or safe or in any way grounded.

Alan Silvestri’s another one [who’s] brilliant at that. “Predator” is full of that. “Predator” has got a constant use of harmony that just makes everything work. Even though you hardly ever see the creature, you’re constantly put in mind of something from another world hunting them down because the music is constantly using this alien, kind of odd octatonic harmony that just makes the entire movie — it doesn’t feel like anything on this Earth because of what the score’s doing. A lot of that is the harmony and the orchestration.