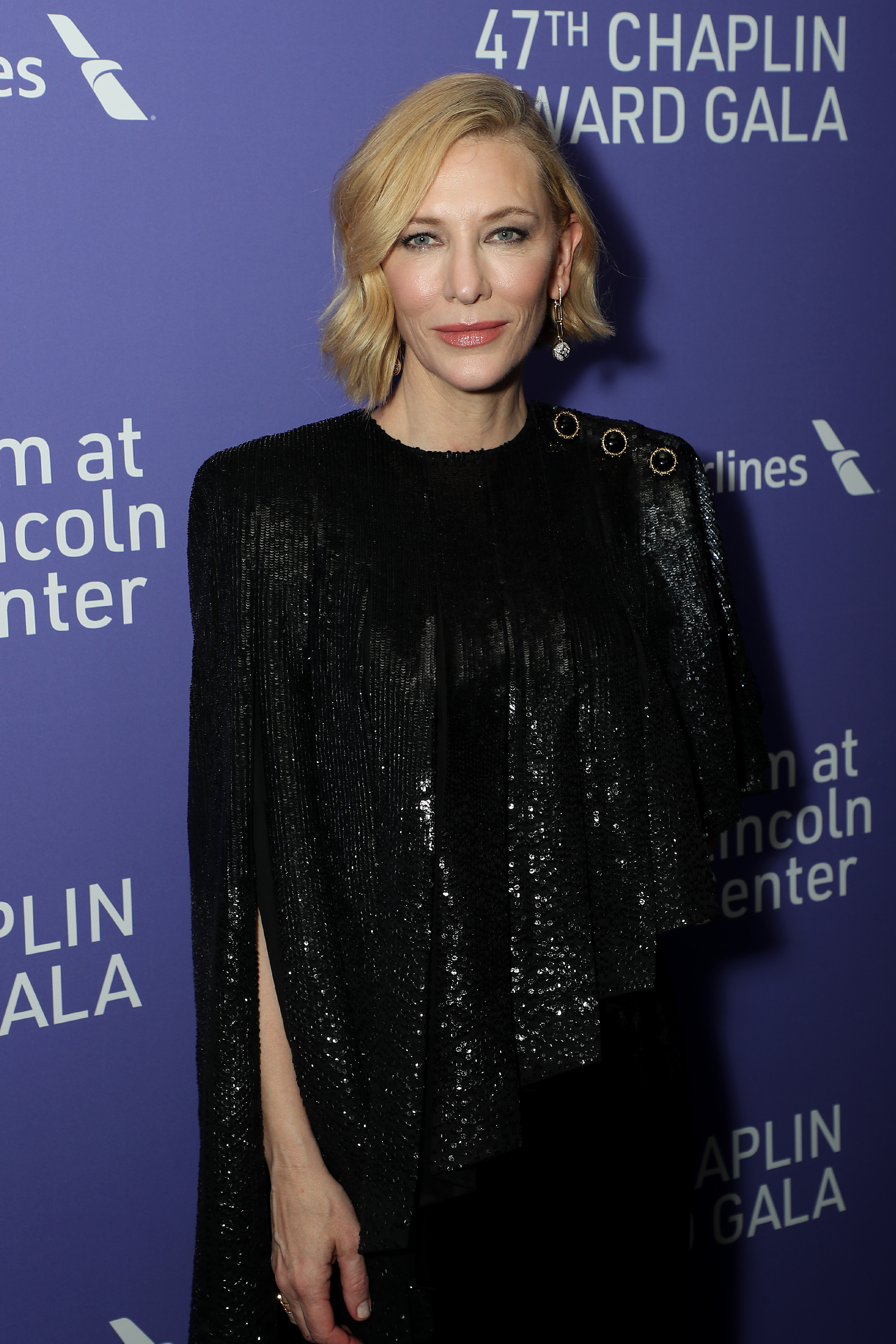 The talent on stage could remove masks, but the audience assembled before them in Alice Tully Hall Monday night were less blessed. That’s the celebrity red carpet in the day of Covid for you!

It took Film at Lincoln Center (née Film Society of Lincoln Center) 47 years to get around to honoring “the Meryl Streep from Down Under,” Australia’s own chameleon-in residence, Cate Blanchett. To give you an idea of her range: not only is she able to get away with impersonating Bob Dylan and Katharine Hepburn, she gets Oscar-nominated and even an Oscar for the effort.

The Chaplin Award (named for its first recipient back in 1972) used to come with a phalanx of the honoree’s name-brand co-stars, who’d introduce a group of film clips they appeared in, then retire to glitter up the after-party. Times have changed, and the celebrity count is way down.

Todd Haynes, who directed the actress to two Academy Award shots (Carol and I’m Not There, the movie that saw Blanchett’s turn as Dylan), was to lead “A Conversation with Cate Blanchett” on stage, but tested positive the day of and had to cancel. Strike Two: Guest Speaker Bradley Cooper, her Nightmare Alley co-star, likewise was “not feeling well and unable to attend the festivities.”

It fell (upward) to Daniel H. Stern, President of Film at Lincoln Center, to bring this brimming bad news to the Alice Tully Hall crowd. They, of course, responded en masse with a primal moan.

“I’m here!” trilled a statuesque celeb in the orchestra section. It was the evening’s honoree, and the moans turned immediately and memorably into roars of delight. She proved quite enough.

Blanchett was not entirely abandoned on her big night. Several of her directors sent filmed testaments to her considerable worth. Austin filmmaker Richard Linklater, who guided her through Where’d You Go, Bernadette, took it upon himself to do The Big Reveal: that she’s half-Texan, half-Australian. Her dad was a US Navy officer who settled in Australia after World War II.

Martin Scorsese admitted he didn’t just love making a movie with Blanchett, he felt a bit blessed by the experience. (His movie was the Howard Hughes bio The Aviator and Cate was Kate—Hepburn.) “The role called for her to do something that I think is extraordinarily difficult, which was to take a very famous and extremely recognizable person and bring her to life as a character in our film,” he said. “I found out that this was exactly the kind of challenge Cate was up for, and to watch her taking it on was really a learning experience. Did you ever see an actor who is so brave and so daring on the one hand and at the same time so confident in her ability to meet that problem head on?”

Fellow Aussies Hugh Jackman and wife Deborra-Lee Furness chimed in with cheery sentiments. “We were at drama school around the same time, and everyone was talking about Cate Blanchett,” he remembered. “You were, for us, the north star—your courage, your range of the work that you do, your commitment to theater and to your community. You are extraordinary.”

Such testimonials served as punctuation for the film clips that illustrated the depth and range of Blanchett’s performances. After the clips had run their course, the evening went into the chat portion of the program. Co-deputy editor of FALC’s Film Comment Devika Girish, having chalked up an earlier podcast with Blanchett, took on the interview duties that Haynes was to do.

The blast of Blanchett Concentrate in the film clips left the actress a little shaky. “Sorry, I’m still reeling from the reel,” she said as she joined Girish on stage for the sit-down grilling.

At 52, she is the second-youngest person ever to receive the Chaplin Award, so Girish logically wondered what in the Blanchett upbringing started her off on this professional track.

The answer was the midday movie on TV—lots of horror, lots of “elementary deductions” from Basil Rathbone, lots of Westerns which her father loved. Also, “I caught Bette Davis at the B-grade end of her career, and I was completely obsessed by her.” And by one Davis doozy in particular: a 1973 TV-movie called Scream, Pretty Peggy, in which Bette had a son (Ted Bessell) who put his girlfriend inside of a sculpture. (Blanchett, by the way, prefers the one-syllable pronunciation of Bette.)

But the performance that has stayed with Blanchett the longest was a rare dramatic turn from an actress primarily known for comedy—Mary Tyler Moore’s portrayal of a mother grieving for a drowned son in 1980’s Oscar-winning Ordinary People. “There was something about the boiling frustration, rage and pain—and unexamined grief—in that woman,” she recalled. “I thought her performance was so full of history—but delivered with such restraint. That’s one of the performances I really remember watching as a teenager and being monumentally affected by.”

How has growing up in Australia affected her as an artist? Blanchett greeted that question with remarkable candor: “Artists in Australia are not particularly valued by the government. There’s been a long history of Australians not consuming their own cultural products, so there’s a wonderful lack of interest in what you have to offer as an artist—which is right, because you expect the oranges to be thrown at you, and, when they’re not, you go, ‘Okay, it’s working.’

“If you have a chance to go overseas, you wouldn’t say to Rameau, ‘Thou shalt not travel.’ You do get inside other cultures by getting inside their filmmaking culture or their theatrical practice, or their literary practice, whatever it is. Australia is a very interesting place to grow up in, but I never once thought I would be an actor. I certainly didn’t feel I would be sitting here tonight. I’m sorry if I appear a bit strange, but I am massively overwhelmed about tonight’s honor.”

She pointed to the “Cate Blanchett” sign above her. “I’m not quite sure who that person is.”

Blanchett may have a right to wonder who that person is, given how many richly varied other people she has inhabited on the screen in some 90 films. They all, she was quick to confess, have the same constant: “Fear. Absolute fear. I’ve been married for quite a long time now, and so I can no longer ask my husband. I just turn over and go, ‘Andrew?’ And he goes, ‘It’ll be fine.’

“This notion of working out how you do it, working out who you are or working out your relationship to the work—it’s just nonsense, I think. When things are working, it’s all about flow, and you don’t need to ask questions until the flow stops. If it’s flowing, it’s easy, so you don’t think about the process. I think each project, each group of people that you’re with, each director, each script—reveals everything you need to do. There’s more inconsistency than consistency, but, if there was anything, it would probably be the fear of finally being found out.”

And what keeps Blanchett going back for more? “It’s the conversation with people. I’m not being disingenuous when I say that every time a film comes to an end, I feel profoundly what Liv Ullmann describes of Ingmar Bergman’s last moment on a set. She worked with him on Scenes from a Marriage, and they literally did not say goodbye to one another. He just walked out the door and left. It’s hard to say goodbye to those things. Every time I finish, I think, ‘That’s it. It’s done. I’m moving on to another chapter. There’s so much else to do in the world.’ Then you have a conversation with someone. It’s a wonderful idea. What they’re asking you to do is weird and impossible, and you think, ‘Oh, okay,’ and you do it again. You start thinking about time left.”

This thought led Blanchett to remember the 2010 Chaplin Award winner, director Robert Altman: “Years ago, we were talking about making a version of Mata Hari, and we were talking about dates, and I was trying to wiggle something around,” she recalled. “Do you remember that wonderful documentary that Laurie Anderson made about the face where you split the face in half, and each half projects something different? I said, ‘I don’t know if we can do it in the next six months,’ and he looked at me with the death side of his face, and he said, ‘Cate, I don’t have a lot of time.’ You do start thinking, ‘Well, how much time do I have?’”

But Blanchett’s immediate future seems pretty much mapped out: three features and two television series. Ahead for her are close encounters of the first kind with Pedro Almodovar (A Manual for Cleaning Women), Warwick Thornton (The New Boy, in which she plays a nun who must deal with a nine-year-old Aboriginal orphan boy) and Francis Ford Coppola (Megalopolis). 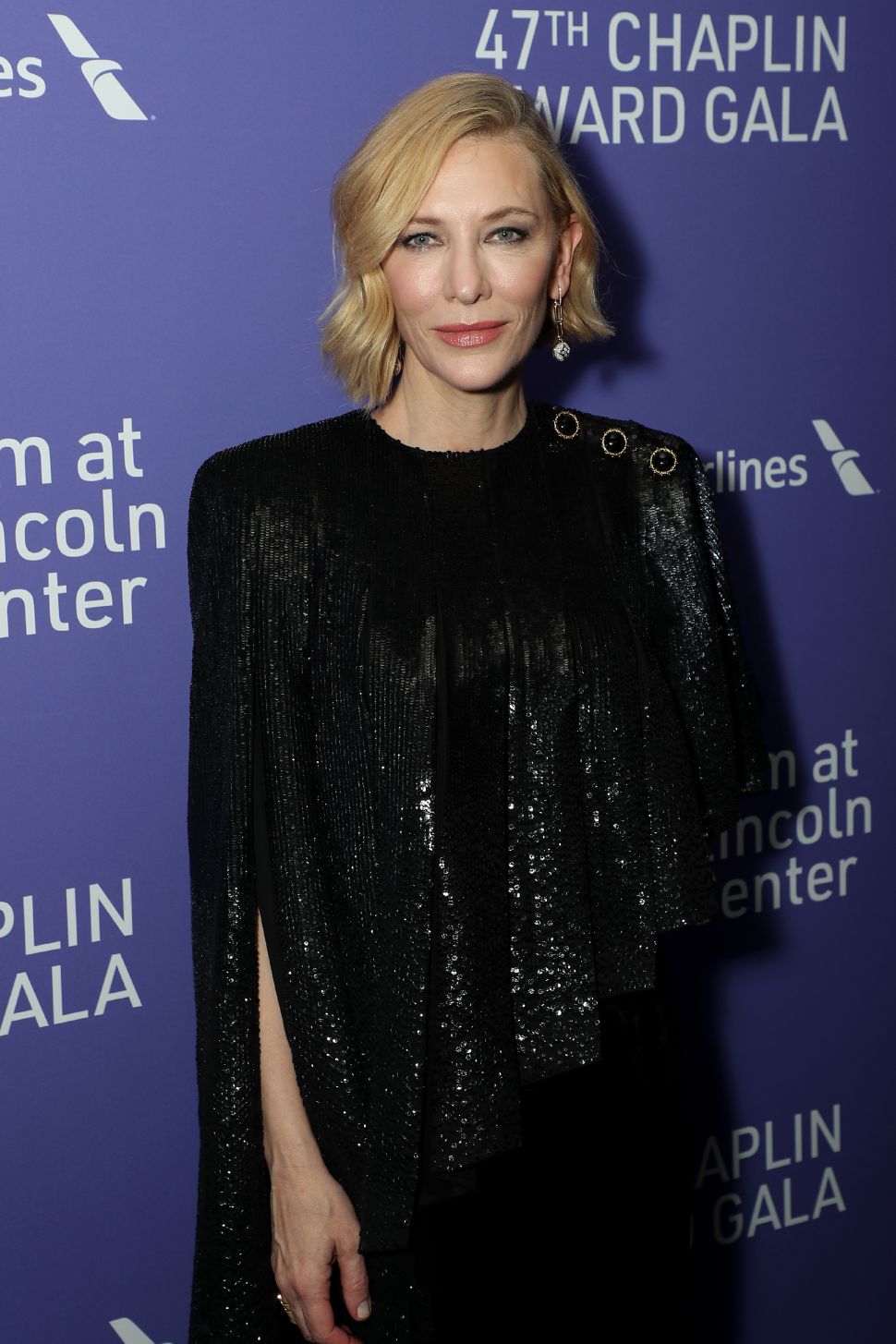