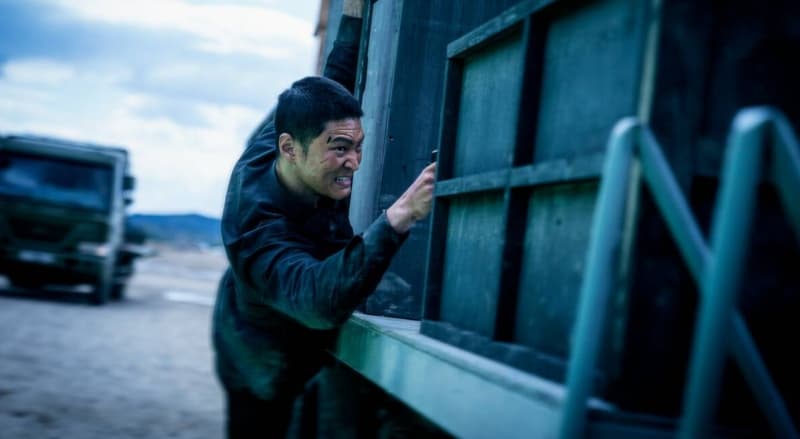 And you thought you’d seen the worst of what a Netflix Original action movie could deliver.

Anticipation is a double-edged sword. It’s nice to look forward to something and have that excitement build before being rewarded with a good time. But hoo boy does it suck when that excitement bites you in the ass with an inexplicably terrible film from talents you’ve seen do so much better. Writer/director Jung Byung-gil has earned all the goodwill in a short time with just three features. His 2008 debut, Action Boys, is a fun documentary about wannabe stuntmen, 2012’s Confession of Murder is a wildly entertaining action/thriller with a darkly comedic edge, and 2017’s The Villainess remains one of the last decade’s best and most inventive action films. You’d have all the reason in the world to expect a lot from his latest, but Carter is instead an aggressively in-your-face mess of digital fuckenings and untapped potential.

A man (Joo Won) wakes up in a fancy apartment wearing only his briefs and finds several Westerners with guns pointed at his face. They ask questions that he can’t answer — his memory is gone, and he doesn’t even know why there’s a fresh surgery scar on the back of his head — but things grow even more confusing when a voice inside his head tells him his name is Carter and he should jump out the window if he wants to live. The leap lands him in a gangster-filled bathhouse, and the fight for his life begins.

The plot seems as familiar as they come — a highly trained fighter, either a retiree or an amnesiac, is targeted by other assassins and must fight his way to the truth — but Carter adds an extra twist suggesting something fresh is in the offing. A virus is turning people into bald, animalistic killers (maybe take this opportunity to go watch Jeff Lieberman’s 1977 oddity, Blue Sunshine) and we get a couple cool horror-lite sequences here as a result (including the film’s best visual showing a post-crash waterfall). That unexpected genre element, though, as with nearly all of the action in Carter, is frequently negated by Jung’s unhinged and visually unappealing approach to capturing it all in a faux one-shot “enhanced” by nonstop digital trickery.

The camera almost never stops moving, with even static scenes glimpsed through a view that bobs and weaves like a drunk asshole looking for his car in a Chili’s parking lot. The actual action scenes up the ante in their awfulness by slamming the camera around, over, under, or through the carnage. What’s the problem you’re saying, Michael Bay flew drones under exploding cars and you loved it! Well that’s because Bay and his team knew what the fuck they were doing and captured the action without losing sight of either the visual appeal or the geography. Jung is capable of such things, but he shows no interest here and instead crafts some of the ugliest action sequences to ever grace the screen.

Digital cuts abound with zero effort to hide them, wirework is erased but still visible in the movement, and beats that should thrill instead annoy as we zoom in and out to “complete” the illusion of a single take. A zip line between rooftops is a mess of CG and poorly stitched together edits. A fight in a moving truck with two enemy vans on either side teases possibility, but the weak CG exteriors do nothing to convince there’s actually any movement at all resulting in more ugly antics. Jung even repeats himself with this same gag later only with a train as the middle player in the Chinese finger trap-like set-piece. A chase on a Papa John’s delivery bike suggests fun but is so clearly stitched together from forty different shots that we lose all sense of momentum. Most of the doors Carter moves through reveal a visible, digital switch to a different location on the other side.

This kind of wild, go-for-broke, nonsense action-cinematography isn’t new, and in the right hands (or with the right intentions) it can deliver a fun and/or competent time. Think some entries in Tsui Hark’s filmography or one-offs like Michael Davis’ Shoot ‘Em Up (2007) and Ilya Naishuller’s Hardcore Henry (2015) — the final product might not be all that good on the whole, but no matter how crazy things get there’s a film literacy and tactile feel to the action shots. Jung himself has previously shown an eye for such things while still delivering banger movies, but it seems he may have taken praise for The Villainess‘ extended one-shots and beautifully chaotic motorcycle fight and come out the other end with the wrong message. Why do better when you can just do more?

What’s most frustrating with Carter is that the bones of legitimately cool set-pieces and skilled action performers/stunts are clearly visible beneath the noise. Step back from the bathhouse sequence and it’s both an unusual locale and a visually interesting one as steam, tattoo ink, and blood coil and spill across naked bodies in violent motion. You instinctively know there are some exciting fight moves unfolding before you, but the jerky camera motions — some physical, others manufactured in post — and butt-ugly digital cuts wash all the talent away. The stunt performers have clearly done the work coming into this with Won himself showing off a memorable physical presence trapped in a one-dimensional experience.

Carter plays out like video game — Carter is the player moving from action to exposition then back to action — but its frenetic and nonsensical execution leaves it feeling even less of an accomplishment than something like Doom (2005). And Doom is trash! Our hero dispatches hundreds of nameless baddies while taking minimal damage himself. A big set-piece involving a train and multiple helicopters should be cool (and most definitely sounds cool on the page), but the deadly serious yet horrendously cartoonish way it’s presented just crashes and burns.

Ugh. Jung’s ambition seems somewhat clear, but whether it’s due to budgetary restraints or the limit of his own skill-sets, Carter is a massive misfire. A one-shot movie where the longest actual single shot is maybe thirty seconds? Ugly digital work turning every action scene into a jumble of nothing? But hey, at least Camilla Belle found a quick gig while apparently vacationing in South Korea? I don’t know, it’s unclear. In the interest of going out on a note of positivity, though, the final shot in the film is absolute aces, and Jung can only go back up from here.

Rob Hunter has been writing for Film School Rejects since before you were born, which is weird seeing as he’s so damn young. He’s our Chief Film Critic and Associate Editor and lists ‘Broadcast News’ as his favorite film of all time. Feel free to say hi if you see him on Twitter @FakeRobHunter.