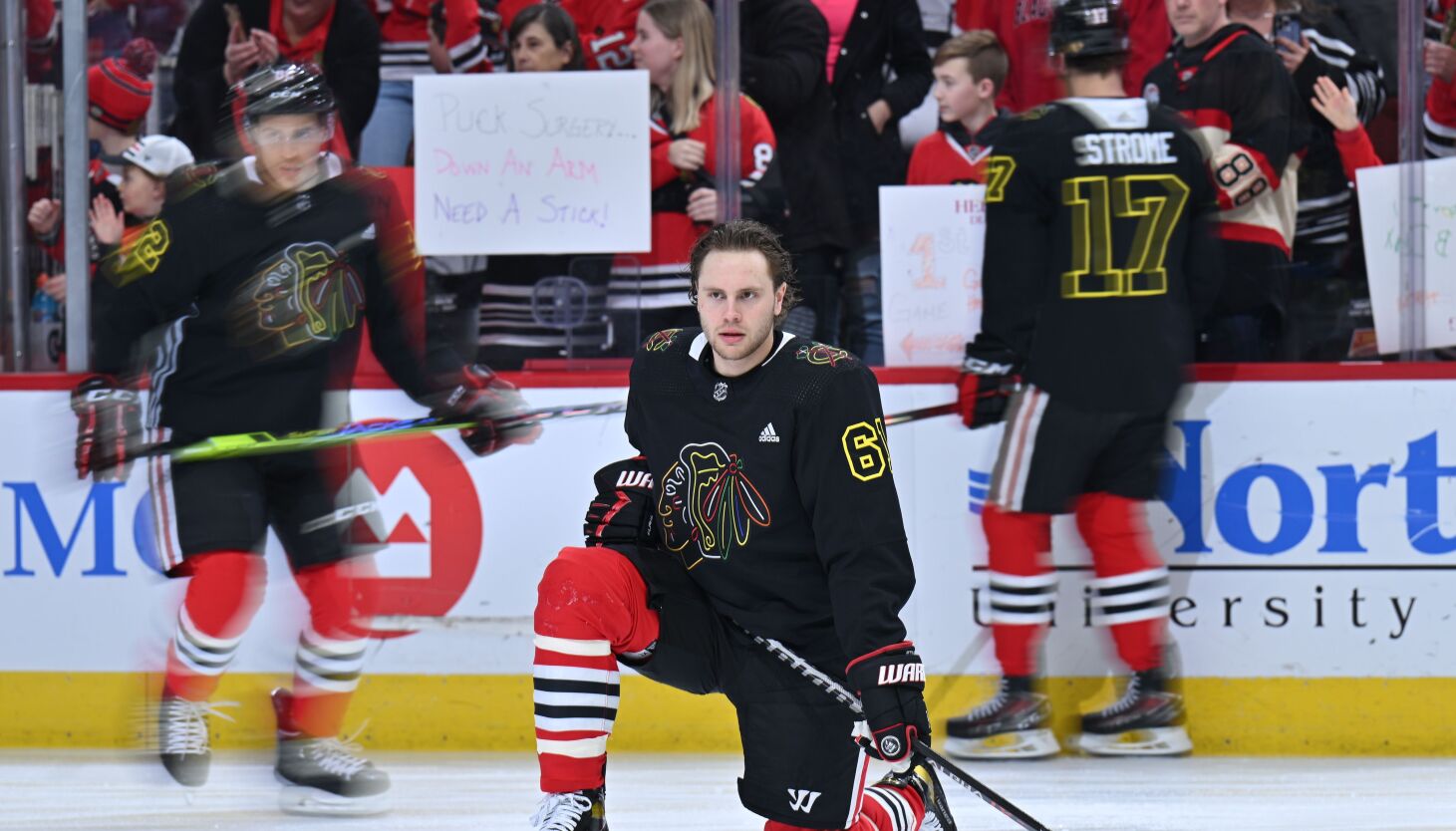 To Stillman, though, reaching that milestone (on April 10 against the Stars) meant a lot.

“It was an important thing for me,” he said Thursday. “It was a little faster but also took a little longer than you think at times, with injuries and stuff like that. Anytime you get another 100 games under your belt is something you can look back on and be proud of. It was big for me and my family.”

Of course, it’ll take a decade for Stillman to have a chance to pass father Cory’s 1,025 career games, and his younger brother Chase — the Devils’ 2021 first-round pick — soon will be chasing him, too.

After a few years in Florida waffling on the cusp of “NHL regular” status, however, Stillman finally has broken through this season with the Blackhawks. The 24-year-old defenseman entered Saturday with 12 points in 49 games, averaging exactly 15 minutes of ice time per game.

He has been part of interim coach Derek King’s roster rotation in recent weeks, and he asked his dad recently if one ever feels fully comfortable in the NHL. Cory told him no. But reaching that 100-game milestone has at least made him more comfortable.

“You’re never fully established because someone is coming for your job every day, but it was … exciting for me to be like, ‘You know what, we’re here,’ ” Stillman said. “And I’m in a position to improve and get better and try to move up the chain.”

Indeed he is. With two years remaining on his contract, he can feel a lot more certain than, say, fellow 24-year-old defenseman Caleb Jones — a pending restricted free agent — that he’ll stick around through the rebuild. And that should lead to plenty of opportunities to move up the depth chart.

King believes Stillman’s ceiling is higher than his current role as a third-pairing player.

“He’s got another level,” King said Thursday. “He’s an Energizer Bunny out there. Sometimes he gets a little reckless, but his ceiling, he has not reached it yet. He’s still young, still figuring out the game. But I like the energy he brings; I like how he plays.

“He’s going to be a good penalty-killer, a good shutdown kind of defenseman, whether it’s like a Jake McCabe or [Calvin] de Haan we have already. [He’ll be] a younger version with maybe a little more energy.”

Stillman believes that, as well.

“I hope to be a top-four defenseman,” he said. “I hope to be a steady guy that can be trusted to play in every situation, whether that’s [against] top lines, with the goalie pulled — for us or for them — [or] someone that can kill penalties. That’s my goal.”

He plans to take a week off -after the Hawks’ season finale -Friday night in Buffalo, then to get in the gym five or six days per week throughout the summer, hoping to continue building up strength.

While he does, the Hawks’ defensive depth chart seems likely to change significantly. For now, though, he looks up to the veterans around him and sees their longevity as a target to strive for.

He can rattle off exactly how many games McCabe, de Haan, Seth Jones and Connor Murphy each have played.

“I have 100 games now, but it’s not nearly enough for a defenseman,” he said. “[I’ll] continue to lean on the older guys and take everything in [about how to] make better decisions with the puck, when to jump, when to stay back, when to try to go for a big hit, when not to.

“In three to five years, you’ll see a drastic change.”