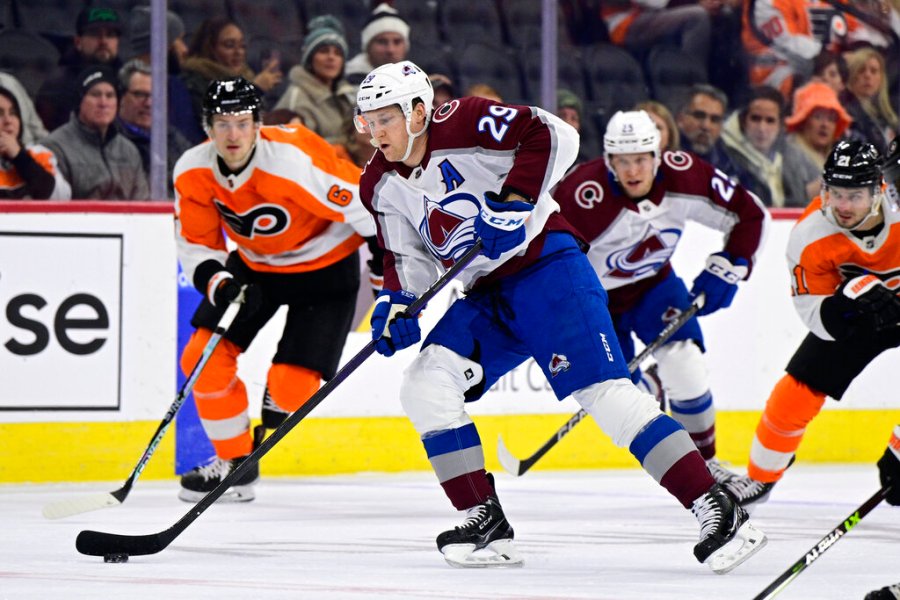 DENVER (KDVR) – Forward Nathan MacKinnon is the latest addition to the Colorado Avalanche’s injury list, as coach Jared Bednar is dealing with losing a player a game at this point.

The first-line center left the first period in the Philadelphia Flyers game Monday night with an upper-body injury. Bednar did not have a time frame for how long he’ll be out, but his absence is a huge blow to the already beat-up team.

MacKinnon is pivotal on the power play and Bednar will have to figure out how to fill another void in the team’s offense.

“It’s going to be tough to score goals, so you don’t want to be giving up easy ones,” Bednar said following the team’s 5-3 loss to the Flyers. “It’s a guy that plays 25 a night … so you got to juggle everything, do the best you can. You just got to keep grinding, find guys that contribute.”

Nearly half the starting roster is injured and Bednar is having to get creative with his lines with players that may be playing their first NHL game ever.

“Guys are going to have to step up. It’s going to be a challenge, it’s been a challenge for us, it seems to be getting worse at this point,” Bednar said. “But you just can’t put contingencies on your work and your effort and your attitude. You got to go out and play hard every night regardless of the cards you’re dealt.”

Bednar and the Avs haven’t let the injury bug bring down the morale of the team. There was some sloppy play in the last couple of games with turnovers and poor puck management, but the chemistry will have to be reformulated as players get healthy and return to the lineup.

“Scoring goals and making the game as clean as you want to make it with your execution has been a challenge and will continue to be for us,” Bednar said.

Center Jayson Megna was claimed on waivers by the Anaheim Ducks on Tuesday.

The 32-year-old played 14 games for the Avs this season. Megna spent most of his career in the minor league and scored his last goal in the NHL in the 2016-17 season.

The Avs next game is Wednesday at Ball Arena against the red-hot Boston Bruins at 7 p.m.