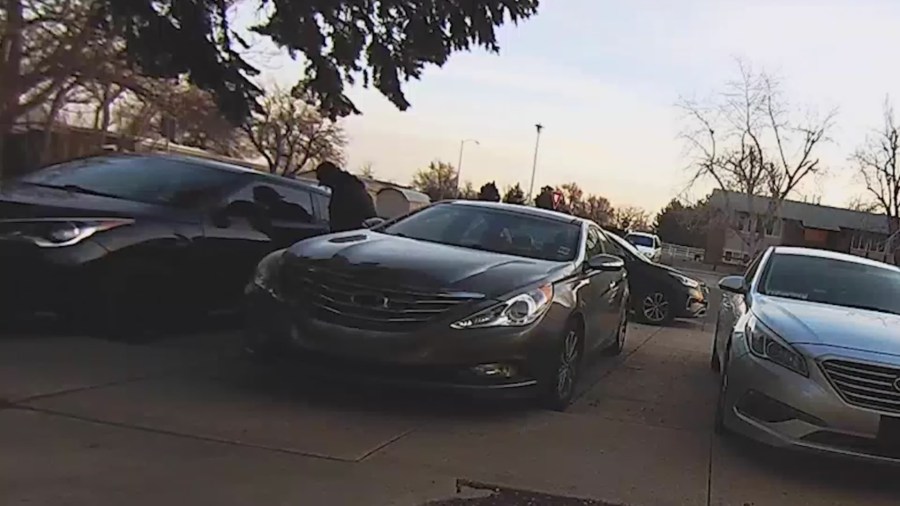 AURORA, Colo. (KDVR) — Home security cameras captured when an Aurora woman’s car was stolen twice in a matter of days.

As of mid-April, Aurora’s had nearly 2,300 auto thefts, a 32% percent spike compared to the same time last year. Never did a brand new business owner think she’d be two of these latest statistics.

Kristie Collier and her husband opened their dream restaurant, Capitol Donuts Pizza and More, on Colfax Avenue a month ago.

On Wednesday afternoon, while serving cronuts and calzones to customers, the new business owner got a security alert on her phone that motion was detected in her driveway in Aurora.

“I looked out on my camera, and sure enough, there was a white van with the red hood and looked like a construction van. One guy got out,” Collier said.

Video captured a brazen thief in broad daylight connecting the car battery Collier purposely unplugged under her hood. A man stole her black 2015 Hyundai Veloster then comes back with an accomplice to grab the van they originally came with.

“I couldn’t believe it because I just got the car back a day before this happened, not even 24 hours I had my vehicle back,” Collier said.

Video from the same spot just two weeks ago captured the first time Collier’s same exact car was stolen. She had just bought the car a day before. The plan was to use it for food deliveries.

“It’s very aggravating,” Collier said. “We have no money right now. We’re just starting a business, and I don’t have money to spend on another vehicle when we just got the car.”

Collier now just hopes someone knows who is behind the two thefts and contacts Metro Denver Crime Stoppers at 720-918-STOP.

“They are just breaking law after law because they know they can get away with it. It’s got to stop. This place is getting horrible to live in,” Collier said.

How to help prevent auto theft

Aurora Police Department officials suggest investing in a steering wheel lock that could deter someone from stealing a vehicle.

APD is hosting a family safety check on June 25 from 11 a.m. to 3 p.m. at the Salvation Army located at 802 N. Quari Court. Officers will be doing vehicle safety and car seat checks and will even have some of those steering wheel locks to give away. They will also do bicycle checks for kids.