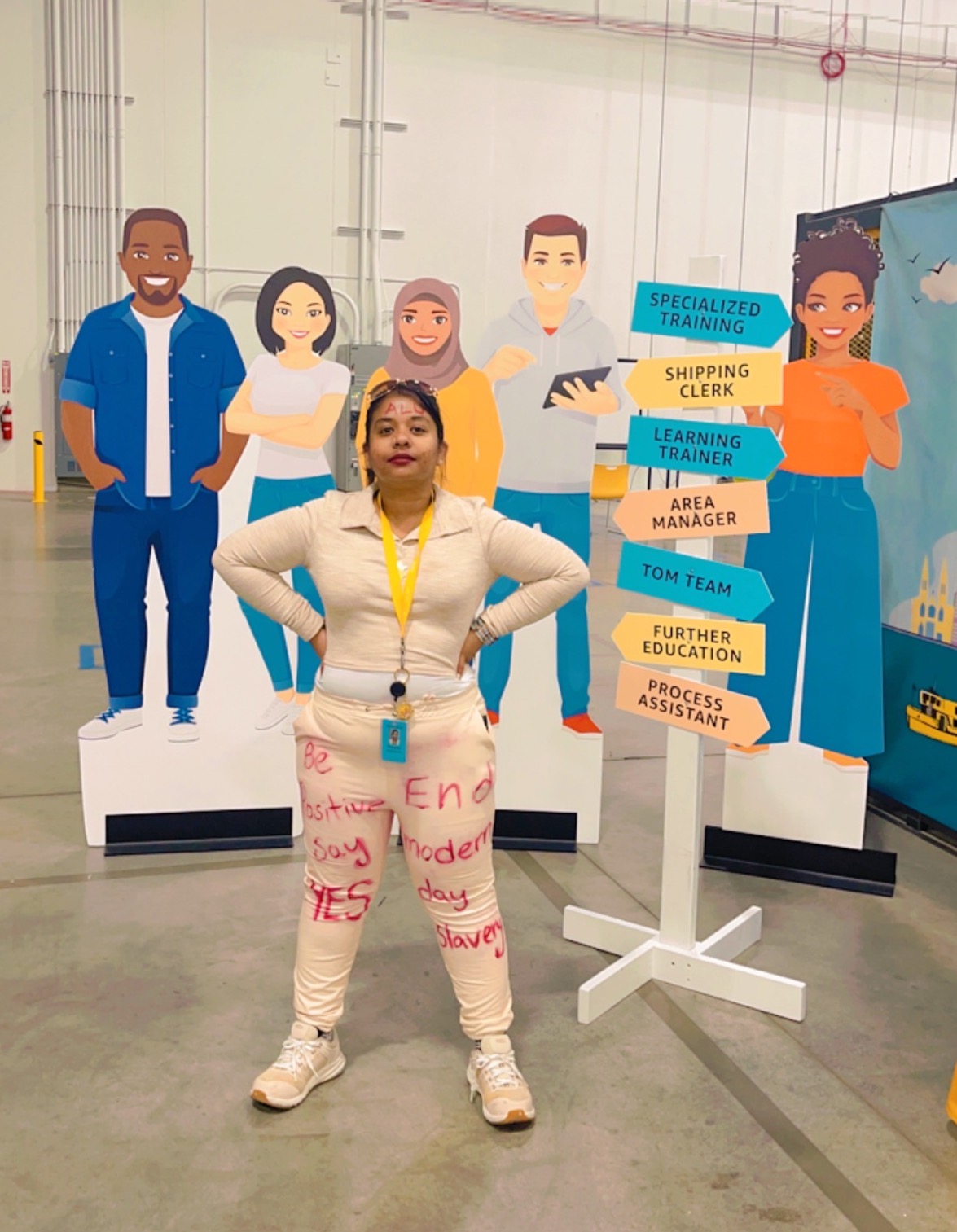 Two expansive warehouses tucked into the marshlands of northwest Staten Island have become the most famous buildings in today’s labor movement. On April 1, an Amazon warehouse called JFK8 successfully voted to unionize the facility’s 8,000 employees. On April 25, the election process began for another Amazon facility, LDJ5, which employs 1,600 workers. The polls will be open until April 29th. Ballots will be counted and certified by the National Labor Relations Board starting May 2nd.

In the wake of the JFK8 vote, Amazon was accused of underestimating union organizer Chris Smalls and his organization. Amazon, a company not used to losing, seems intent on not repeating its mistakes of a few weeks ago.

In the last week before the union vote, Amazon sought to bring the gears of the union drive to a grinding halt. According to workers at LDJ5, the company is deploying a tactic traditionally used by unions against hostile employers, not the other way around: A complete work stoppage at the end of every shift, multiple times a day.

“The conveyor belts just stop. Literally the machines shut down,” says Julian Mitchell-Israel, the field director for Amazon Labor Union and a worker at LDJ5.

The work stoppages weren’t intended to give workers a break, but to funnel them into captive-audience meetings wherein LDJ5 managers–as well as union-busting consultants and managers from other states–would extol the virtues of Amazon and denounce the union.

After the conveyors shut down, workers are shuffled toward the back of the warehouse. “Managers start corralling people,” says Mitchell-Israel. “They start coming around like, ‘hey, we got a meeting in the back.’” The managers—anywhere from 10 to 20 on a given day— don’t tell workers the meeting is about the union. “[Managers] just say it’s a meeting with the vice president of HR, the general manager is going to speak,” says Mitchell-Israel.

While the National Labor Relations Board currently allows companies to require attendance at captive audience meetings — and the meetings at Amazon’s JFK8 facility were indeed mandatory — attendance at the LDJ5’s isn’t required. Site and shift leaders simply don’t tell workers the meetings are optional. The lack of clarity, shutting down the line, and physically herding workers toward the meeting location led a lot of employees to just follow the crowd. “As soon as a bit of a crowd starts going, everyone follows,” recalls Mitchell-Israel. For those who chose not to attend, workers weren’t able to continue their work. Instead, says Mitchell-Israel, “a lot of people leave or hang out in the break room.”

Amazon did not respond to multiple requests for comment.

A less aggressive approach after suffering a loss at JFK8

There’s no clear reason why Amazon shifted from making meetings mandatory at JFK8 to making them optional at LDJ5. One hypothesis: Amazon may be trying a less aggressive approach because their heavy-handed tactics backfired in favor of the union last time.

Amazon also changed when the work stoppage meetings happened during a shift at LDJ5. “They switched it up. It was at the top of the shift so people would have to keep working after. That was happening at the start of the week,” says Mitchell-Israel. Multiple workers confirmed that once the work stoppage-led meetings changed to the end of shifts, workers who had already attended one were allowed to go home early—paid for the end of every shift following their completed attendance at the meeting.

Multiple workers at LDJ5 say that those who hadn’t been recorded attending a meeting would be approached one-on-one by a manager, taken off the floor, and asked to watch a video of the anti-union speech, which lasts roughly half an hour. It’s unclear how many workers at LDJ5 were aware that the meetings weren’t mandatory and how many refused to watch the video.

Workers at LDJ5 also described the content of the meetings as similar to what JFK8’s captive-audience meetings were like: Managers and union-busting consultants (known by some LDJ5 workers as “the busters”) from around the country sing the praises of the company, act as emotional stewards for workers who might otherwise find comfort in union solidarity, and spread misleading claims about unions. Scott Taylor, the site leader who leads the captive audience meetings with a sentimental story about his mom, “has probably given that same speech at least 15 times” in the past week, said an LDJ5 worker who spoke on the condition of anonymity. As the election neared, Pranama Jayatissa, a worker at LDJ5 since November 2020, said the content of the speech shifted from why people should vote against the union to telling them to vote no.

When workers arrived at work April 25th, they were greeted with a massive anti-union presence in the facility: Every column in the warehouse is now covered in huge “VOTE NO/VOTA NO” stickers, huge banners reading “VOTE NO” hang from the rafters, and the site even set up a table surrounded by balloons with boxes of Krispy Kreme donuts. “They’re doing everything in their might to stop people,” says Jayatissa.

“Jeff Bezos sent crumbs of Krispy Kreme donuts,” she says. “Like we’re some animals who pick up some crumbs and think ‘Amazon treats us good so we don’t have to work for a union’.” 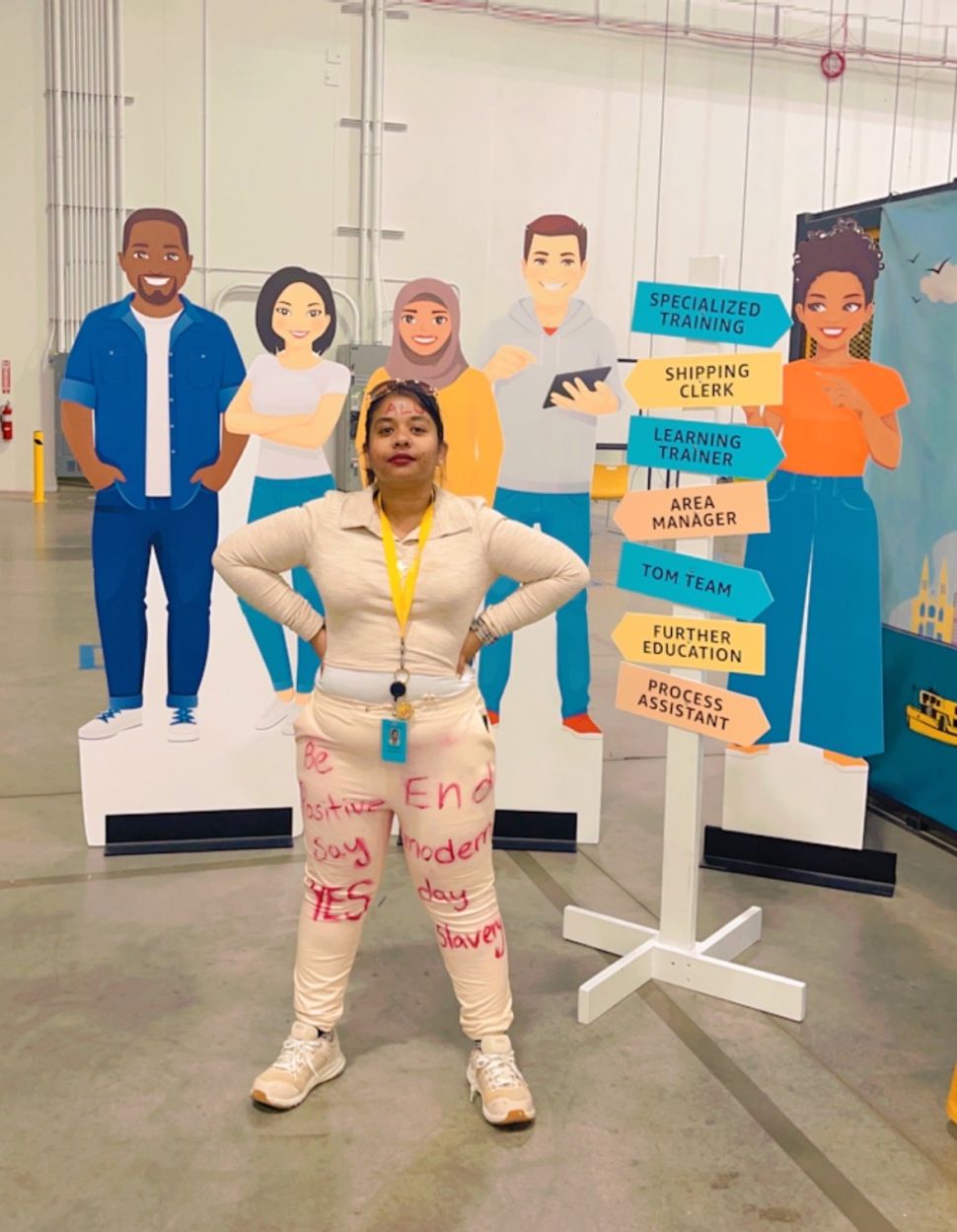