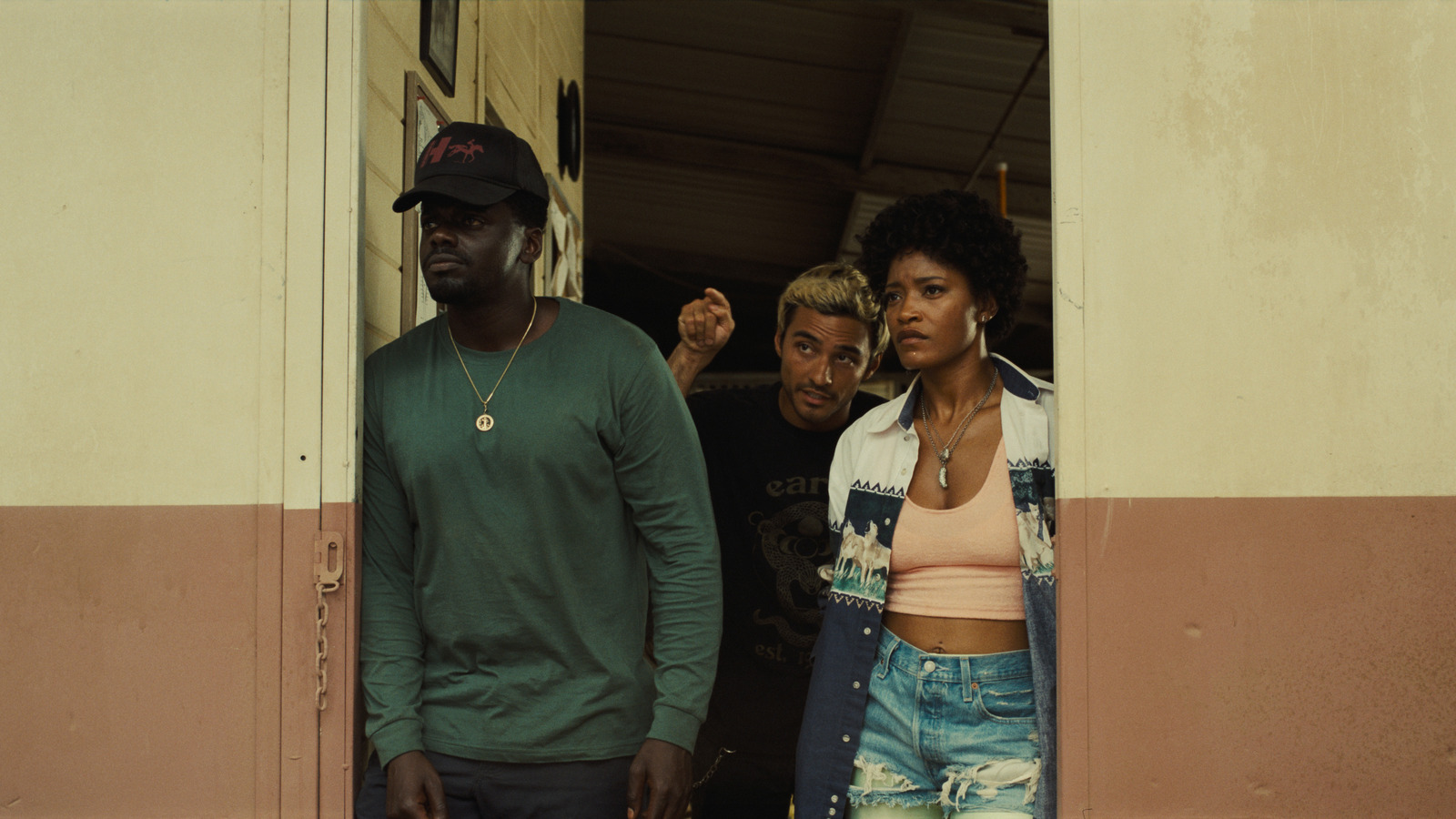 This final push to get the “Oprah shot” is as much a push to attack the circular-shaped alien, luring it out into the open ranges of the Haywood ranch thanks to a mix of loud music, inflatable tube-men from a local car dealership, and live bait (specifically OJ riding Lucky). The thematic commentary here comes a bit earlier — the night before the big push, Angel asks for affirmation from the others that what they’re doing might actually “save lives.” (Peele’s script wisely does not attempt to offer any grander explanation for what the UFO is doing on Earth, if there are others, if the government knows, etc.) But this odd quartet really just wants to find some greater success, to break out in a way that they haven’t before.

It’s in keeping with the generally cynical viewpoint Peele has within “Nope” — a movie where a chimpanzee attack spawns not stricter animal-protection laws within Hollywood, but chintzy parodies, and where people gawp at their eventual destruction — that while the Haywoods achieve their immediate goal of capturing footage of the UFO and surviving in the process, it’s arguably all for naught. Their ambush is initially waylaid by a mirror-helmeted TMZ cameraman who’s snuck his way onto the ranch, presuming correctly that something newsworthy is going on, but in doing so, he ends up getting killed because he’s focused too much on the clout he may gain. But even after the Haywoods, Angel, and Antlers, the latter of whom sacrifices himself mid-shoot, manage to film the alien and kill it — thanks to Emerald unleashing a massive cowboy balloon at Jupiter’s Claim that the UFO unknowingly eats and is destroyed by — they did all the hard work and will get none of the credit. As soon as Emerald realizes she succeeded, she also realizes that a bevy of onlookers and news crews are at Jupiter’s Claim to see what’s going on, and got the same kind of Oprah shot.

It’s a modern mirror image of one of the film’s early monologues, as Emerald explains that the Haywoods are descended from the Black jockey filmed by Eadweard Muybridge in his 1870s combination of still photographs that were turned into the first motion picture. Emerald notes that many people know Muybridge (either by name or by the images he captured), but basically, no one knows the man in the images. That man, intentionally or not, was exploited, beginning one of the longest traditions in cinema, of careless exploitation. And in the end, Emerald and OJ — both of whom survive, as does Angel — came face to face with a creepy, jellyfish-like floating alien … and their work is exploited by others who got there too late.

“Nope” is not the cleanest narrative Peele has written — that remains his debut picture, “Get Out”, which is exceptionally effective and tidy in the way that it mounts a horror narrative with enough profoundly disturbing familiarity while balancing a body-horror side of things. “Us” has a mostly limited scope, but leaves the audience a bit empty with its final set of revelations and ambiguous ending, yet is thankfully bolstered by Lupita Nyong’o’s career-best dual performance. “Nope” is a big throwback to classic summer movies as much as it’s a commentary on how dangerously cruel and callous Hollywood can be — there’s a great deal of inspiration mined from “Jaws” and “Jurassic Park” as well as M. Night Shyamalan’s “Signs” as well as the Hitchcock classic “The Birds.” And that bigness is representative in how Peele and cinematographer Hoyte van Hoytema pull off some remarkable, IMAX-filmed imagery (if you have the wherewithal and feel safe enough to do so, you really ought to see this on the biggest possible screen).

“Nope” is Jordan Peele going big or going home. And it works so well that Peele has proven himself more than worthy as the next great blockbuster director. There are only a handful of English-language filmmakers who can balance big themes with big imagery, from Spielberg to Shyamalan (sometimes, if not all the time) to Edgar Wright and Rian Johnson. Jordan Peele’s up to the task, too; he might outshine the others.