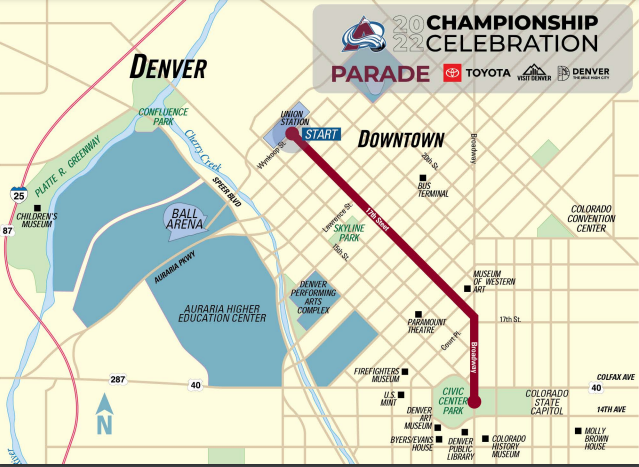 DENVER (KDVR) — The Colorado Avalanche will be celebrating with Lord Stanley at the Stanley Cup Championship Celebration in Denver on Thursday.

If you’re planning on heading to Civic Center Park for the parade and rally, here are five things to know:

1. What time does it start?

Parking will be very limited in downtown Denver and several roads will be closed. The Avalanche suggested people take public transportation, ride a bike, or use a scooter to get to downtown.

These are the roads that the City of Denver said will be closed on Wednesday and Thursday:

3. What will happen at the rally and parade?

The Colorado Avalanche said there will be live music, season highlight reels, a live video feed from the parade, and more. Once the parade arrives, the City and County of Denver will hold a program to honor the team. The program will feature the following:

4. What should you bring to the rally and parade?

Meteorologist Chris Tomer said it will be a dry, sunny morning with a 30% chance of afternoon t-storms. Highs will be around 90 degrees.